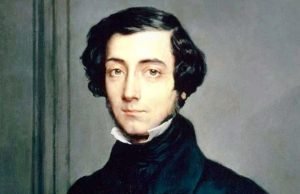 “[It’s] the most comprehensive and penetrating analysis of the relationship between character and society in America that has ever been written.”

That’s how one historian described Alexis de Tocqueville’s Democracy in America; a work considered among the most influential books of the 19th century.

Published in two volumes between 1835 and 1840, Alexis de Tocqueville analyzed the social and political life of early America.

Born in the wake of the French revolution, he was a diplomat, philosopher, historian and aristocrat. Initially he  traveled to America in 1831 to study our prisons, but quickly found something greater underfoot. 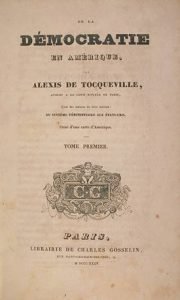 He penned: “Upon my arrival in the United States the religious aspect of the country was the first thing that struck my attention; and the longer I stayed there, the more I perceived the great political consequences resulting from this new state of things, to which I was unaccustomed. In France I had almost always seen the spirit of religion and the spirit of freedom marching in opposite directions. But in America I found they were intimately united and that they reigned in common over the same country…”

Alexis de Tocqueville observed how our “notions of Christianity and of liberty” were so deeply intertwined that it was “impossible to…conceive one without the other.”

He noted in his travels how our Puritan forefathers immigrated and established both a “democratic and republican religion.”

He summarized how “religion in America…must be regarded as the foremost of the political institutions of that country…[imparting] a taste for freedom.” Alexis confessed his inability to “know whether all Americans [had] a sincere faith” but was “certain” that we fully accepted religion and all other institutions being connected. “This opinion,” he wrote, “is not particular to a class of citizens or a party, but it belongs to the whole nation and to every rank of society.”

Alexis de Tocqueville affirmed this thesis through an anecdote of an August 23, 1831 court case he observed in Chester County, New York. In this case, a witness admitted to the judge his atheism. In Alexis’ home nation of enlightened France, atheism was not uncommon nor was it reason for concern in matters of integrity. And yet this American judge “refused his testimony” because atheism was enough reason to lose the “confidence of the court” in any testimony someone possessed. Alexis also documented a local newspaper’s report for how this judge was surprised to discover “a man living who did not believe in the existence of God…[and] knew of no case in a Christian country, where a witness had been permitted to testify without such belief.”

His traveling partner—Gustave de Beaumont—penned his own memoir known as the Marie ou l’Esclavage aux E’tas-Unis (1835). Beaumont documented over a dozen different sects of Christianity in early America and wrote: “Religion…is not only a moral institution but also a political institution … In the United States, the law is never atheistic … All of the American constitutions proclaim freedom of conscience and the liberty and equality of all the confessions…”

Beaumont noted how the Massachusetts’s Constitution recognized “only Christians.” He cited how Maryland’s Constitution declared “all of the faiths are free” and gave its legislature the power to tax “for the support of the Christian religion.” The Vermont Constitution recognized “only the Christian faiths” and mandated “every congregation of Christians [to] celebrate the Sabbath.” Pennsylvania required a belief in God as part of its citizenry. Beaumont further documented how most states demanded profession of Christianity to serve in public office.

Beaumont summarized: “In general, anyone who adheres to one of the religious sects, whose number is immense in the United States, enjoys all of his social and political rights in peace. But the man who would claim to have neither a church nor religious beliefs would not only be excluded from all civil employment and from all political offices … but … would be an object of moral persecution of all kinds. No one would care to have any social relations with him … No one in the United States believes that a man without religion could be an honest man.”

In 21st century America such religious fervor would be considered prejudicially extreme, even among the Christian faithful. We’d never consider excluding someone from employment or political office if they were not Christian, nor discounting the court testimony of the agnostic or atheist.

But in early America—founded as a Christian nation–we did…and it was a preferred state of living.

Alexis de Tocqueville also opined on how America could lose our democracy and freedom. It would happen, he said, in slow measures as Americans “in a restless search for…petty, vulgar pleasures” eventually numbed to its political “protective powers” who removed “autonomy… from each citizen.”

“It is …difficult to imagine,” de Tocqueville concluded, “how men who have completely given up the habit of self-government could successfully choose those who should do it for them…The vices of those who govern and the ineptitude of those governed would soon bring it to ruin and…revert to its abasement to one single master.”

It’s why Alexis de Tocqueville’s Democracy in America should be required reading in America’s history classes. He not only documented, as an outsider, America’s Christian founding and deep religious fabric, but offered a blueprint for how “we the people” could lose our cherished liberty and democracy.