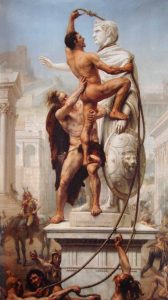 It’s been said that Rome wasn’t built in a day…and that’s true. But it also didn’t fall in a day. And the reasons it collapsed were impacted by certain political decisions, unavoidable events and socio-cultural shifts.

In general, there were five factors that eroded Rome’s foundation over three centuries:

1. UNEXPECTED PLAGUES. Between 165 and 252 AD, millions of Romans were killed by deadly viruses, including three of their emperors. One of the plagues destroyed a third of the Roman population.

2. UNRESTRAINED AND OPEN BORDERS. While the Chinese were bricking their “great wall,” Rome allowed refugees and immigrants to enter freely and overrun their system. The historian Will Durant commented: “if [Rome] had occasionally closed her gates to let assimilation catch up with infiltration, she might have gained new racial and literary vitality from the infusion, and might have remained a Roman Rome, the voice and citadel of the West.”

3. LOSS OF NATIONAL CULTURE AND LANGUAGE. Initially immigrants into the Roman empire adopted the language (Latin), but eventually newcomers kept their own native tongue, forcing Romans to learn immigrant dialects and to adopt foreign customs, holidays and traditions. The idea of being “Roman” and living “Roman” was eventually lost.

4. ENTITLEMENTS AND WELFARE. In the early second century AD, Roman politicians used “free” grain, wine, bread and public circuses to buy political favor. The violence of the circuses de-sensitized the populace, distracted the ignorant and placated the self-absorbed from their leaders’ true political intentions. Eventually entitled Romans sold their rights of “freedom” in exchange for food and pleasure.

5. LOSS OF VIRTUE AND INCREASE IN VICE. As the Roman Empire aged, its culture devolved into theft, greed, violence, falsehood, sexual immorality, gluttony, injustice and infidelity. The 5th century historian Salvian concluded: “What hope can there be for the Romans when the barbarians are more pure than they?” 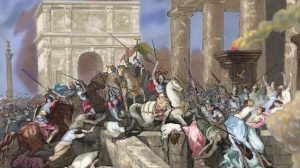 The influence of the Catholic Church also proved a factor, as it chose to isolate and segregate from the growing pagan culture. In the late stages of the Roman Empire, fewer Christians held public Roman office and influenced the culture. Meanwhile Roman government became more corrupt. The Roman constitution was actually ignored by its politicians in order to retain their power and a paycheck. Historians note how the Roman army was always in a war…somewhere…to distract the population from domestic problems. 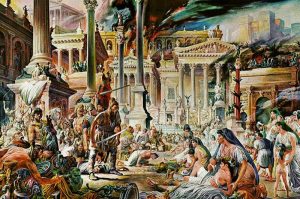 Overall, in a matter of decades, Roman patriotism declined with each new generation. Durant wrote: “The new generation, having inherited world mastery, had no time or inclination to defend it; that readiness for war which had characterized the Roman landowner disappeared.”

As the Roman military weakened, more and more terrorist attacks happened…both inside and outside the nation state of Italy. In the mid-5th century Attila the Hun killed 20 million in his marches across Europe, Africa and Persia…and attempted to seize Rome…but failed.

Historically, there are two different “bookend sackings” of Rome. First, by the Visigoths (410 AD) and later the Vandals (455 AD). On September 4, 476 AD, the longest and greatest empire in world history was finally done.

The decline and fall of the Roman Empire is a textbook tale for all nations and societies to heed.

America has only been around 245 years. We’re just a pup in the timeline of nation empires. The 20th century was labeled “the American century” for our exceptionalism in war, economy, the arts, sports and other cultural contributions. All the world looked to us for the answers and many countries moved toward democracy as a result, while great Communist walls fell.

But we’d be ignorant and foolish to think we can travel the same path as Rome, which we surely are doing, and not face a similar demise. For decades our enemies have looked for ways to break this grand country and end the “American experiment” of a democratic-republic, one founded upon biblical principles and Christian faith. Incidentally, one of the greatest enemies to Christianity has always been Islam.

On September 11, 2001 America was attacked by Islamic terrorists. They attacked the heart of our national pride: our “world” influence and economy (World Trade Center) and our military (Pentagon). The fourth plane, by the way, had its sights on the U.S. Capitol building. And nothing has been the same since that terrible day.

In the past 20 years America’s moral and spiritual foundations has rapidly eroded. We’ve become a more profane, violent, greedy, addicted, litigious, sensual, sexual, arrogant and divisive culture. Our youngest generations (those born after 1980) have no recollection of the America that’s fading fast into history.

Christianity, once the moral citadel of American culture, is now openly mocked, hated and persecuted. Our schools have become indoctrination zones. Our media is now propaganda wings for the political left or right. Our populace, saddled in debt, has become an entitlement culture. Meanwhile, movements to “improve” and “reimagine” America only create more hate, fear and angst…as they tear down our history and remake our story.

We’re just modern Romans, friends. And we are ripe for the picking…very ripe.