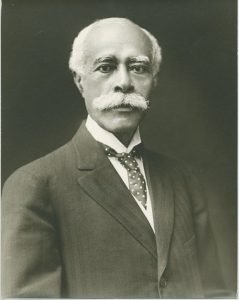 He was one of America’s wealthiest Black businessmen. As a Republican State Treasurer he saved debt-ridden Louisiana following the Civil War. But his story runs counter to many of the popular narratives in Black history today. Consequently, it’s a tale that worth telling.

He was a sugar planter from Louisiana…and a slave owner…the wealthiest Black slave owner in his day.

He became one of America’s most influential Southern Black leaders.

Dubuclet was born in 1810 near Baton Rouge, LA, the son of two free Blacks. He father co-owned a lucrative sugar plantation that Antoine inherited upon his father’s death. Along with the property he also inherited over 70 slaves.

Antoine married Claire Pollard in the mid-1830s—a wealthy free Black woman who owned her own plantation (with 44 slaves). Dubluclet managed both plantations, growing his wealth considerably. By 1860 he owned more than 100 slaves and was Louisiana’s wealthiest slave holder. In 1852, his wife died. They had nine children–all who were educated in France (two sons became medical doctors). He later remarried and had three more children.

Dubuclet relied upon his first wife’s estate—which he had wisely divested and invested—to survive the deep financial losses that his sugar plantations incurred. Following the war, the entire South was destroyed and bankrupt.

Dubuclet was just the man to save Louisiana.

Like sugar, Antoine knew money and how to grow it. In 1868 he won the state’s treasurer position as a member of the Republican party. Dubuclet restored the fortunes of Louisiana and was re-elected in 1870 and 1874. However, his political success was not without opposition. He was the only office holder who survived the “Battle of Liberty Place” in September of 1874—an attempted insurrection by the Crescent White League. He also overcame impeachment in 1876. It’s no wonder that a year later Dubuclet retired from politics.

He’s remembered as “a true Southern gentleman: smart, well-dressed and debonair.” He was the former slave owner and Republican politician who saved Louisiana from bankruptcy. In 1990 Dubuclet was inducted into the Louisiana Black History Hall of Fame.

It’s quite the story. A tale that, according to one historian, “will tear apart historical perception.”