In 1940 church attendance in America hovered at 49%. Not bad but not great either.
Meanwhile our nation was gripped in a battle against communist aggression–both at home and abroad. The Soviets had fired the first shot in the “space race” and America was behind the eight-ball.
On February 7, 1954, President Dwight D. Eisenhower gave a radio address from the White House. The occasion was an American Legion initiative called “Back to God.” Eisenhower, the former Supreme Commander of the U.S. armed forces in World War 2, offered this spiritual encouragement:

“As a former soldier, I am delighted that our veterans are sponsoring a movement to increase our awareness of God in our daily lives. In battle, they learned a great truth-that there are no atheists in the foxholes. They know that in time of test and trial, we instinctively turn to God for new courage and peace of mind. All the history of America bears witness to this truth. our faith in God, and through faith in themselves as His children, our forefathers designed and built this Republic…”

Eisenhower then noted how George Washington sought “divine guidance” at Valley Forge and how Abraham Lincoln “recognized that only under God could this nation win a new birth of freedom.”
Two weeks later, at a similar Legion event, Eisenhower gave an ominous warning to all Americans:

“If the State gives rights, it can–and inevitably will–take away those rights. Without God, there could be no American form of Government, nor an American way of life. Recognition of the Supreme Being is the first–the most basic–expression of Americanism.”

Ike’s warning proved prophetic. In less than ten years, the Supreme Court of the United States ruled it unconstitutional for American public schools to employ non-sectarian prayers and readings from the Bible as part of the traditional moral curriculum. It was the first major blow to what had been widely known as “Christian America.” To quote Bob Dylan: “The times, they are a’changin’.”
Since 1962 America has never been the same. In the course of sixty years, secularists have further eroded America’s spiritual foundations. They’ve systematically and methodically stole, revised, segregated, erased and cancelled America’s Godly heritage. From public prayers to courthouse Nativity scenes to Ten Commandment posters, any vestige of “church” mixing with the State was challenged and, ultimately, removed. The irony? The Constitution says nothing about the “separation of church and state.” It only states that Congress can make no law that essentially creates an endorsed state religion…and, in this case, they had not. It was over-reach by the SCOTUS.
Many social scientists and cultural historians have observed that secularist progressive reforms have hardly made America better. If anything, they have made us bitter. We are more divided, angry, profane, violent, sexual and ignorant. Instead of evolving, we’ve devolved as a society and culture. We have become but a fragile shell of what our Founding Fathers created.
Eisenhower (who, again, battled secular and atheist Communists in his day) knew this battle was real. He concluded: 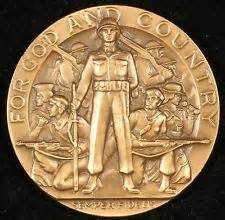 “Each day we must ask that Almighty God will set and keep His protecting hand over us so that we may pass on to those who come after us the heritage of a free people, secure in their God-given rights and in full control of a Government dedicated to the preservation of those rights.”

Ike’s encouragement of Judeo-Christian religion, as well as a national evangelical revival in the 1950s, truly created a new nation “under God” (two words added to our pledge under the Eisenhower administration). By 1960 church attendance had rocketed 20%! Essentially seven in ten Americans now attended church or synagogue services regularly (at least twice a month), the highest on record. And 97% of all Americans, even the less religious, still believed that God existed. It would be our faith in God and man that steeled us for the decade of the 1960s.

Eisenhower’s “Back to God” message, helped by the ministry of the Reverend Billy Graham, positioned America, in that decade, to eventually win that space race and put a man on the moon July 20, 1969. During the 1960s, we battled communism from Vietnam to Cuba and faced our darkest hours when assassin bullets took the lives of Martin Luther King, Jr., John and Bobby Kennedy. We struggled through civil rights, anti-war protests, duck-and-cover nuclear drills and hippie permissiveness. A new drug culture emerged, with “free love” (sexual promiscuity) in its wake.

Many attribute Eisenhower’s spiritual legacy and virtuous leadership to America’s ability to navigate these difficult and demanding moments. Indeed, it certainly did not hurt. America is a good nation and you can’t spell “good” without G-O-D.

It’s something to think about, even yet today, as we face our own dark seasons and difficult times.