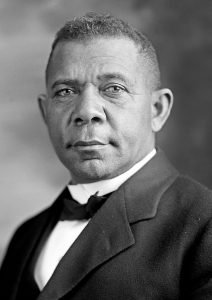 Booker was born into slavery in Virginia, sometime in 1856. After Lincoln emancipated the slaves, his family moved to the free state of West Virginia. His name was only “Booker” for years. However, for school registration he needed a last name and he chose “Washington” (after his stepfather). He later added the middle name of “Taliaferro” (his original last name through his mother).

He was now Booker T. Washington.

He also enjoyed school. He’d eventually study at the Hampton Institute and Wayland Seminary. At 25 years of age, he was named principal of a brand-new Black school that would eventually be known as Tuskegee University. His students built the first campus facilities, under his direction. They made and laid the bricks, constructed and painted the buildings, grew the crops and raised livestock (for their meals).

It was his only job. By 1915, the school employed 200 faculty, teaching 38 disciplines, to over 1500 students in 100 buildings. President McKinley was so impressed he brought his entire cabinet to experience the school. Booker routinely preached the best way for Blacks to gain equal rights was through their “industry, thrift, intelligence and property.”

Washington believed Blacks could (and should) work equally with Whites.

In 1901, President Teddy Roosevelt invited Booker (a fellow Republican) to dine with him in the White House. It was the first time such an intimate dinner was held inside the President’s quarters…and it caused outrage and controversy. In many places, segregation was the law and the optics of a Black man enjoying a meal with a White man wasn’t good.

He penned 14 books, including his autobiography “Up From Slavery” (1901). It’s a work that remains a literary classic. Booker spoke at large venues, including Madison Square Garden and Carnegie Hall. His oratorical skills inspired both Black and White audiences, and Booker’s fame spread across America. He was particularly popular among Southern Blacks.

Former supporter W.E.B. Dubois, founder of the N.A.A.C.P., criticized Booker for “compromising” to “white political rule.” Essentially, Booker desired to create bridges whereas Dubois preferred tearing down walls. Booker embraced a slower approach to full civil rights for Blacks, whereas Dubois argued for those rights immediately (through political activism). Dubois viewed Washington as “The Great Accommodator,” but Booker continued to reason that confrontational racial politics would only agitate, frustrate and backfire. The irony? Despite Washington’s accommodations, he still contributed “secretly and substantially” to activist Blacks attempting to end segregation politically.

Washington’s success was only clouded by his private despair.

Booker married three times. First to Fannie (1882), then to Olivia (1885) and, finally, to Margaret (1893). His first two wives bore him a daughter and two sons. And both of them died within 2-4 years of their wedding day to Booker.

Booker T. Washington died November 14, 1915 in Tuskegee. His exhausting personal schedule, speaking and travel proved a contributing factor to the rapid decline of health. He was only 59 years old. His funeral was held at the Tuskegee Institute with nearly 8,000 in attendance. At his death the Institute’s endowment fund was $2 million ($55.6 million today). He not only built a great school…he gave it a solid financial future.

Washington has been memorialized on stamps, coins, airplanes, ships, state parks and several schools. Harvard and Dartmouth awarded him honorary degrees. In the center of Tuskegee University a monument was built to commemorate Booker with the inscription: He lifted the veil of ignorance from his people and pointed the way to progress through education and industry.