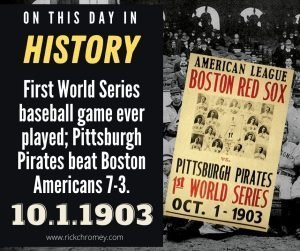 In fact, America’s story–how we worked, what we believed, the battles we fought and the glory we shared–is found in the game. From the rise of a new industrialized economy to racism (against Jew, Italian, blacks) to celebrity culture, baseball was there. And every time life seemed bleak–when America (and her game) seemed off the rails–something happened (or somebody happened) to restore the public’s affection.

That was year of the famous “Black Sox” scandal where eight White Sox players–including the legendary hitter Shoeless Joe Jackson–worked with gamblers to throw the World Series to the lesser Cincinnati Reds. The scandal tarnished the game as “fixed” and unwholesome.

The year 1919 also ended of the dead ball ear in baseball, when great pitchers (like Cy Young, Christy Mathewson, Walter Johnson) dominated the game. But it was also the same year that a new breakout superstar emerged. A legend who’d change the game (and America) forever: Babe Ruth. By the end of the 1920s baseball was truly the American pastime.

No contest is more important to baseball than the “World Series.” The fact it was called a “world” series in 1903 shows 20th century American hubris on full display. After all, it wasn’t until 1992, the end of the 20th century, that a non-U.S. team appeared in (and won) a World Series: the Toronto Blue Jays. It would be seven decades (1969) before baseball had a non-U.S. team (Montreal Expos). And while baseball enjoyed a multi-national European flavor for most of its early hey-days, blacks (from any national origin) were excluded from he major leagues until Jackie Robinson in 1946. And yet the Japanese would wait another five decades to finally (and truly) make America’s game a “world” game.

But 1903 is also a significant year…not just in baseball but for America’s influence.

That’s the year America came out to the world…and not just in baseball. In the same year that baseball’s FIRST World Series was held, America also made it’s first transatlantic radio broadcast (to England), the first multi-racial labor union was formed, the Ford Motor company and Harley-Davidson were founded, the U.S. gained rights to the Panama Canal and the Wright Brothers famously flew their plane.

You could argue that 1903 was America’s coming out party to the world. It was the opening of the American century.

In the coming decades, despite a deep national Depression and crises (like Pearl Harbor, JFK’s assassination and the Challenger explosion), America played the 20th century like a baseball game. We might’ve got two strikes down but we still found a way to get on base. We might’ve been buried early by the other team but we found second life and a way to comeback. America fought in two World Wars to save Europe (and other places) from evil fascists and vicious tyrants. We invented (or improved) the technology in transportation and communications that reimagined civilized culture. We created Hollywood, Madison Avenue and Wall Street. We carved our presidents faces in South Dakota rock, put a man on the moon and brought down the Berlin Wall.

It was quite a century for America.

And baseball was there for the entire story. In fact, baseball pretty much told the story.

From 1903’s launch of a World Series to  to the infamous Mark McGwire-Sammy Sosa race to beat the Babe’s single-season home run record in 1998, its an inspirational American tale of exceptionalism. From the Cy Young to Babe Ruth to Joe DiMaggio to Jackie Robinson to Willie Mays to Pete Rose to Ichiro Suzuki, it’s an American story of breaking down barriers and building new legends. From the “dead ball era” to “eight men out” to “a league of their own” to “moneyball,” it’s a classic Hollywood feature.