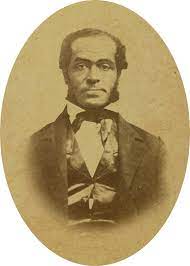 He was a former slave and a wealthy farmer who founded his own town. And he personally purchased the freedom of over a dozen family members. His name was Frank McWhorter (1777-1854). But once Frank broke the yoke of his own slavery, he joyously added a new prefix moniker: FREE.

Free Frank McWhorter…because freedom is what drove this man.

McWhorter was the son of a West African slave named Juda. She was abducted and transported to South Carolina where a slave owner named George McWhorter purchased her. The slave owner was likely Frank’s father. It was a rough start to a tough life.

In 1795 McWhorter moved his farm to southern Kentucky and put his 18-year-old slave Frank in charge. But he also leased him as a day laborer to neighbors. This proved a hidden blessing. Frank not only discovered new skills, but he also learned how to do business. He often earned more money than he needed to repay his master.

As a result, Frank started to save his extra earnings.

He salted away so much money that when his master moved to Tennessee (and left him to manage the farm), Frank started his own saltpeter company. Saltpeter was used for fertilizer, gun powder and fireworks. And during the War of 1812 the explosive chemical was in high demand, making Frank an increasingly wealthy man.

In 1799, Frank married Lucy—a slave on a neighboring plantation—and together they had 13 children born into slavery…but only four survived.

Frank desperately dreamed of freedom. He wanted his family to be free.

And at that time the only path to freedom was through escape or purchase. By 1817 Frank had finally saved enough money. He redeemed his pregnant wife Lucy first for $800 ($14,500 today). She’d later give birth to Squire—the first Black McWhorter born free.

Two years later, Frank purchased his own freedom. That’s when he changed his name. He wanted everyone to know he was “Free Frank McWhorter.” In 1829, he traded his saltpeter plant for the freedom of another son. By now he also had two more freeborn children.

A year later, Free Frank McWhorter moved his family to Pike County, IL to farm in the western frontier. In 1836, he purchased 80 acres from the U.S. government for $100. McWhorter then built his home and plotted out lots to create a town called “New Philadelphia.” It was a fully integrated community, including an integrated school. It was also the first municipality incorporated by a Black man. McWhorter served as its mayor for years.

The rest of his life was devoted to FREEDOM. McWhorter purchased liberty for his grown children and grandchildren, still in slavery. In his travels to buy his relatives’ freedom, he often risked his own capture. Despite his legally free status, devious slave traders often kidnapped free Blacks and transported them deep into Southern plantations. Somehow “Free Frank” always slipped through their hands.

Free Frank McWhorter died on September 7, 1854. In his life he had redeemed 16 family members from slavery. His heirs used their estate money to free another seven.

New Philadelphia—the town founded and led by McWhorter—slowly declined. The railroad was built to the north in Baylis and businesses moved to improve their access. By 1900 the town was gone and the land reverted back to farmland. In 2005 it was placed on the National Register of Historic Places. “Free Frank” even has his own memorial highway along I-72 in Pike County, IL.

According to one biographer, McWhorter was “a live, enterprising man, a reputable, worthy citizen, kind, benevolent and honest. He labored hard to free his posterity from the galling yoke of Southern slavery.”

It’s truly a story about freedom, albeit a tale that’s grown dusty due to time and neglect.