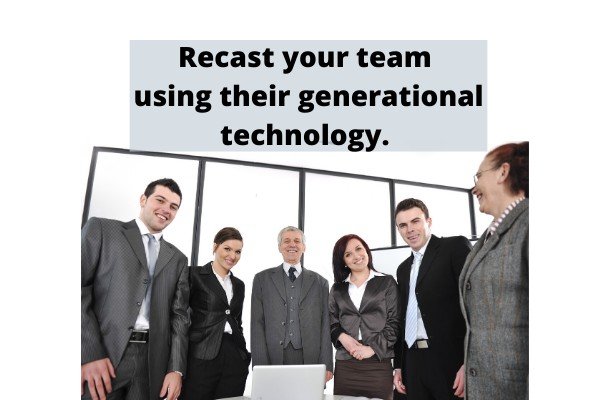 The Millennial is creative but lazy and entitled. The Gen Xer is hardworking, but rude and disloyal. The Boomer is reliable but old and out of touch. It’s a generational cocktail that produces derision and indecision, doubt and depression.

So, let’s say you’re a 35-year old and you lead a diverse team of three different ages. You have a worker who’s 18, another is 56 and yet one more aged 65. Traditionally, you view them as Gen Z, Gen X and Boomer, but you could also see them from a different perspective.

Recast them through their generational technologies, to bring out the best performance.

Let me show you how.

The 18-year old was born in 2001. She’s part of the Net (1990-2010) and iTech (2000-2020) generations. She’s been coming of age since 2011 and will reach full adult maturity in 2026. She’s known only a digital, cyberculture. The internet is like electricity. Her first technology was the smartphone and the iPad. She’s been baptized in social media. As a young employee, she is fluid in digital media, embraces diversity and is constantly connected. She doesn’t do email nor Facebook but enjoys Snapchat and Instagram. She wants to be a YouTube entrepreneur. The Gen Zer likes long breaks and often calls in sick.

The 56-year old was born in 1963. He’s part of the Space (1950-1970) and Gamer (1960-1980) generations. He came of age between 1973 and 1988. His whole life has been like a video game and a rocket ride. He’s seen revolutions and recessions, a man landing on the moon and a teacher dying at takeoff. He remembers Nixon’s resignation, Reagan’s near assassination and Clinton’s impeachment. He grew up on rabbit ears, snowy channels, and black and white television. Consequently, he’s a bit jaded. He’s a realist. He struggles with newer tech. He still prefers old-school letters but has fully embraced email. He got hit hard by the Great Recession and has little saved for retirement. He’s working for every last penny. The Gen Xer has had five jobs in twenty years.

The 65-year old was born in 1954. She’s part of the Television (1940-1960) and Space (1950-1960) generations. She came of age between 1964 and 1979. She watched JFK’s assassination, the Beatles and Walter Cronkite on television. She had an 8-Track in her car and a stack of records on her bedroom floor. She’s an idealist with a bit of hippie in her. She doesn’t mind the tech but thinks it’s over-rated. She prefers to talk face-to-face. She’s worked for the company for thirty years. She’s Ms. Reliable and she struggles with the team at times.

And then there’s you. You were born in 1984. You’re part of the Cable Television (1970-1990) and Personal Computer-Cell Phone (1980-2000) generations. You came of age between 1994 and 2009. You grew up in a modem, flip phone, desktop culture. You watched the 9-11 terrorist attacks on CNN and suckled on an MTV cribs reality culture. You are computer literate and tech savvy. You’re confident, verbal and view the world differently than older workers. You don’t mind email but prefer texts.

Your team is a reflection of their “coming of age” technology. One travels life (and work) like a video game while another freely swims in social media. One prefers texts and another wants face-to-face. One is company-loyal and another works to play.

Now you have a good picture of who’s on your team. How will you now delegate workflow? What will change?

The people working for you are the products of their generation’s technology.

They are GenTech. Learn more by buying my book: GenTech – An American Story of Technology, Change and Who We REALLY Are. The eBook is now available here. The print edition will be available May 26, 2020 at your favorite bookstore and online, and is available for pre-order now.