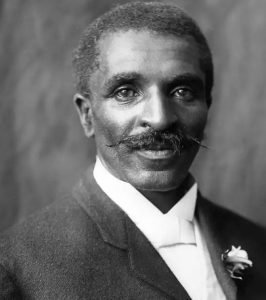 “When you can do the common things of life in an uncommon way, you will command the attention of the world.”

These weren’t just words to George Washington Carver (1864-1943). They were his legacy. Few Americans lived bigger and better lives. Carver was born a slave, but eventually became a botanist, educator, conservationist, and artist. He was also a devout Christian who fought for racial harmony and graciously served everyone he met.

Carver’s story is what made America great…and still “commands the attention of the world.”

Carver was born a slave in Missouri, sometime around 1864. His parents were slaves. When George was a newborn baby, he and his mother and sister were kidnapped. The slave raiders transported his family to Arkansas and sold them in Kentucky. However, Carver’s Missouri owner was a kind and caring Christian. He searched the country for the Carver family, but only found George. From that day forward, he raised George as one of his sons. As a result, Carver was encouraged to read, write, and draw. His favorite subject was botany, but what he really loved was art.

At age 11, Carver moved to Neosho, MO to enroll in a school for Black children.

That’s when he met Mariah Watkins, a Black woman and devout Christian.  She boarded the boy, taught him Christianity and encouraged his schooling in order to “give…learning back to [his] people.” And that’s exactly what Carver did. He had a relentless drive to learn as much as possible. Despite experiencing hardship, prejudice and poverty, Carver continued to learn, no matter where it led him. He moved to Kansas (where he graduated high school) and to Iowa ( to study art and painting at Simpson College). That’s where his art teacher discovered George’s love for botany…and encouraged him to change degrees…and schools.

He was Iowa State’s first Black student. He earned a bachelor’s (1894) and then a master’s (1896). Carver’s high intelligence, positive attitude and impressive agricultural skills soon landed him a faculty job at Iowa State (their first Black professor).

But George Washington Carver would receive a higher call.

Booker T. Washington, the principal of the esteemed Tuskegee Institute in Alabama wanted Carver desperately on his faculty. He knew an agricultural school would distinguish Tuskegee and George was the only Black with a masters in the discipline. Booker offered a higher-than-average salary to George and then gave the bachelor Carver his own two-room campus apartment (one just for his plants).

This favored accommodation, however, sparked jealousy with single Tuskegee instructors (who shared rooms and enjoyed more meager salaries), as well as other faculty members. The relocation from “free” Iowa to the Jim Crow South also proved a difficult transition for George. The Ku Klux Klan. Lynching. Black vote suppression. Segregation. It was something he never got used to.

For the next 47 years, George was a fixture at Tuskegee.

Carver was an introvert. He preferred working his plants more than teaching his students (despite being a beloved professor). His work load, along with faculty resentment, Booker’s expectations and Southern living often discouraged Carver, but he never showed it. George optimistically dedicated himself to teaching, friendships and supporting the Tuskegee’s mission to educate the Black race.

George taught them how to rotate crops, fertilize with “swamp muck,” and feed their livestock better. He encouraged farmers to stop growing cotton and plant different crops (like peanuts, sweet potatoes, soybeans) to infuse the soil with nitrogen. Crop rotation allowed the soil to rest and rejuvenate. It was a new technique that the Midwest would learn too late (during the Dust Bowl years). Consequently, one of the South’s highest yielding crops soon became peanuts.

And that forced Carver to experiment and explore new uses for the legume. George W. Carver literally became “The Peanut Man.” In his labs, he developed over 300 food, commercial and industrial “peanut” products (including milk, sauces, oils and soaps). He also invented cosmetics, paper and medications using peanuts.

By 1910, Carver was famous for his agricultural science, not just in America but around the world.

The introverted Carver parlayed his rising celebrity platform to promote peanuts, Tuskegee and racial harmony. Carver was a prolific writer. He contributed to magazines, newspapers and journals. George wrote tens of thousands of personal letters. He became friends with U.S. Presidents (Teddy Roosevelt) and captains of industry (Henry Ford). After his death, his life savings funded a Tuskegee foundation and museum. Carver also displayed more of his personal art in his elder years. He was multi-talented.

Carver was also a devout Christian.

In fact, many biographers credit his humility, gentleness, compassion and joy to his deep Christian faith. Although he never married, George kept many close friendships with his church. He believed only Christianity could eradicate racism and social disharmony. He was also a Bible scholar and popular Sunday School teacher.

George W. Carver died January 5, 1943. He was buried next to Booker T. Washington on the Tuskegee campus. His gravestone reads: “He could have added fortune to fame, but caring for neither, he found happiness and honor in being helpful to the world.” It’s a humble sentiment.

And yet Carver has been “famously” memorialized as one of Black America’s greatest persons. His likeness adorns stamps, coins and medals. Carver’s name appears on schools, bridges and streets. He has state parks and botanical gardens named for him. George’s Missouri birthplace is a National Monument. Since 1943, January 5 has been George Washington Carver Day. He’s been elected to multiple “halls of fame” and awarded several honorary degrees.

From slavery to peanuts to presidents. Carver packed a lot of life into his 79 years.