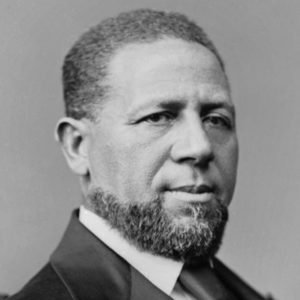 And some people wonder what happened.

And then there are people like Hiram Rhodes Revels (1827-1901). He’s a cut above. A leader’s leader. A highly-accomplished man.

One of black history’s dusty and oft-forgotten heroes.

Rhodes was a freeborn black in North Carolina. His family had been free for half a century. Hiram’s father pastored a Baptist church and his family tree included lawyers, politicians, educators and abolitionists. His cousin was one of John Brown’s raiders killed in the tragic 1859 Harper’s Ferry incident.

In 1845 he was ordained in the African Methodist Episcopal (AME) Church.

Revels served in churches from Ohio to Kansas. He was once jailed for “preaching the gospel to Negroes.” His preaching was so powerful that slave owners feared he’d incite runaways. He preached often in Missouri even though it was illegal for free blacks to live there.

Eventually Revels headed east for more religious education and to serve as a preacher for an A.M.E. church and black school principal in Baltimore, MD. During the Civil War, Revels recruited two regiments of black soldiers and served as a chaplain, most notably at the Battle of Vicksburg. After the war, he returned west to start a freedmen’s school in St. Louis (1863-1864) and preach for a church in Leavenworth, KS (1865).

In 1866, Hiram was called to pastor a church in post-Civil War Mississippi.

He was 39 years old and ready to put down roots with his wife and five daughters. His new pastoral platform allowed him to establish multiple Reconstruction schools for black children, help in Methodist district leadership and serve in the Mississippi State Senate (1869).

One early biographer noted that to this point, Revels “had never voted [in Mississippi], had never attended a political meeting, and of course, had never made a political speech.” But Hiram was highly educated, a powerful communicator and unifying spirit. He was also a black Republican. His opening prayer for the 1870 Mississippi state legislature was “impressive and eloquent.”

The prayer also made Hiram R. Revels a rising political star for Republican Reconstruction in the South.

One of the first tasks for Mississippi legislators, with the state rejoining the Union, was to elect new U.S. senators. Prior to the 17th Amendment in 1913, national senators were appointed posts. And Magnolia state politicians now wanted Hiram. But there was a new problem. In Washington, D.C., Democrats opposed his appointment because he was black and, according to the Dred Scott decision of 1857, blacks weren’t citizens. Even though the 14th Amendment reversed (1868) reversed this decision, U.S. Senate rules required nine years of citizenship prior to appointment.

However, supporters argued Revels was a free black at birth and had long voted (as a citizen of Ohio). Nevertheless, the most persuasive argument was the Civil War, as well as the 13th and 14th Amendments had reversed the Dred Scott decision. It was null and void…and never existed. The Republican Charles Sumner (R-MA) later concluded:

All men are created equal, says the great Declaration, and now a great act attests this verity. Today we make the Declaration a reality. …The Declaration was only half established by Independence. The greatest duty remained behind. In assuring the equal rights of all we complete the work.

On February 25, 1870, Hiram R. Revels–with a strict party line vote of 48-8–was affirmed as the first black person seated as United States Senator.

Revels went right to work. He promoted racial equality and the capability of black leaders at the national level. He served on Education and Labor committees, often battling “Radical Republicans” who wanted to punish ex-Confederate, secessionist rebels. The North Carolina raised and Mississippian Hiram argued for more moderate approaches. He proposed amnesty and restoration of citizenship. Revels also argued against Democrat calls for segregated schools. He even nominated exceptional black men to the U.S. military academy.

But his political career was short-lived. His initial appointment was only for a year and, despite several offers to remain in D.C. on Grant’s work teams, Revels moved on.

But Revels still had fire in his belly too.

In 1875, Revels loudly protested “corrupt and dishonest” Republican “carpet baggers” working the GOP vote in Mississippi. He knew this wasn’t what the Republicans stood for. His letter of protest to President U.S. Grant found traction and wide circulation. It seeded the beginning of the end of Reconstruction in 1877.

Even in retirement, Revels continued to pastor churches, teach theology, write and edit for journals and newspapers. He died serving at a church conference on January 16, 1901, and was buried in Holly Springs, MS.

Revels greatest legacy is becoming the first U.S. black senator. But there’s one more twist to this incredible man’s story. Remember that Hiram was elected to fill a previously vacated one-year Senate term. Whose term did he finish out? None other than Jefferson Davis, the Mississippi senator who vacated his seat to lead as President of the new southern Confederacy in 1861.