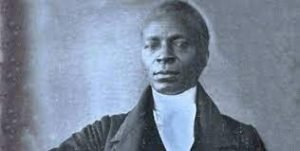 He was a wealthy Philadelphia businessman…and a leading voice for abolitionism. He was a sailmaker, author and political activist…a free black in a white world.

One biographer noted he was “one of the most powerful African-American voices…he knew how to use the press and the speaker’s podium. He knew about building alliances…[and] the nature of power and authority.”

Forten was born in Philadelphia, PA on September 2, 1766, the grandson of a slave who “freed himself.” When his father died young, James was forced to work at the tender age of seven. However, thanks to a Quaker abolitionist and educator named Anthony Benezet, young Forten was still educated free of charge. Nevertheless, by age nine he was working full-time. He’d literally work his entire life.

At age fourteen, James Forten joined the Colonial Navy during the Revolutionary War. His ship was eventually captured, and Forten was sequestered to a British “starving ship.” For most captured Blacks this was the end of the line. But Forten’s young, impressive personality saved his life. His friendly relationship with the captain’s son helped him to negotiate an early parole…and a new address. Forten spent a year in a London shipyard before returning to Philadelphia in 1790.

James was only 24 years old, but his shipyard experience primed him for a career in sail-making. Initially laboring as an apprentice, his leadership skills landed a promotion to foreman. By the time his boss retired nine years later, Forten had saved enough to buy the the whole business (a financial feat few Blacks enjoyed).

Very soon Forten was one of Philadelphia’s most prominent and wealthiest businessmen.

That’s when he began to publicly advocate—as a Black man—for the abolition of slavery and civil rights for Blacks to vote and serve on juries. Forten anonymously authored a pamphlet titled “Letters from a Man of Colour” (1813) that advocated for black civil rights. He also took a surprising and strong stand against the “American Colonization Society”—an early 19th century movement to re-settle free blacks in Africa, Canada or Haiti. Many abolitionists and clergy advocated for re-colonization but Forten disagreed. Since free blacks were born in the States, he argued, America was their home. It was wrong to remove native Americans.

His argument convinced and converted William Lloyd Garrison—soon to become America’s leading abolitionist. Forten then used his wealth and prominence to help Garrison launch The Liberator abolitionist newspaper in 1831. He even wrote for it. The Liberator was a religious journal that influenced many Americans to adopt abolitionist views, including a new reader named Frederick Douglass. The newspaper ran for three decades (it’s last issue in 1865 with the ratification of the 13th Amendment to abolish slavery).

It was a journal that might not have happened without Jame’s Forten’s wealth, business skills and passion for abolishing slavery.

James Forten died March 4, 1842, at 75 years of age. Thousands attended his funeral, both black and white. He left behind a wife of 36 years and nine children (all who followed in their father’s abolitionist calling, marrying prominent and becoming wealthy). Oh, and there’s one more interesting tidbit: Forten never tasted alcohol (serving as a steadfast supporter of the Temperance Society).

One biographer capped his life with this single line: “When James Forten died, he left behind an exemplary family, a sizable fortune, and a legacy of philanthropy and activism that inspired generations of black Philadelphians.”

It’s a success story you probably have never heard.