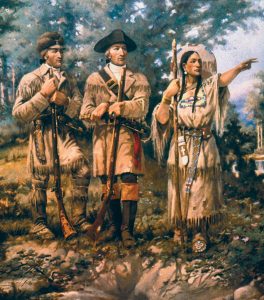 In May of 1804 the Corps of Discovery, led by captains Meriwether Lewis and William Clark went on pursuit of a fabled Northwest passage. They’d be gone over two years. Along the way they’d meet dozens of Indian tribes, including the fierce Sioux and Blackfoot. They’d traverse on keelboat, canoe, horseback and by foot through some of the West’s most gorgeous and intimidating landscapes. They’d spend three long winters together–surviving brutal cold, blinding blizzards and relentless rain. They’d encounter grizzlies, elk, rattlesnakes, wolves and other dangerous animals.

Only the hardiest could survive such a journey.

And it’s a credit to the expedition’s resolve and fortitude that only one casualty happened (Charles Floyd)…and he died of appendicitis not from the elements or attack.

Nevertheless, the Corps of Discovery never would’ve made it past the Bitterroots of Montana had it not been for two Indian women.

The first one is as famously-known as Lewis and Clark themselves. But the second is largely lost to history and often overlooked in the stories about the Corps of Discovery.

The first woman to save the Corps of Discovery was a young Shoshone slave girl named Sacagawea.

She was only 20 years old when she served Lewis and Clark’s expedition, but she helped the men to survive the rivers, weather, hunger and other Indians. And she did it with a baby on her back. In many ways, Sacagawea was herself still a kid. A decade earlier, she had been enslaved by the Hidatsa Indians and taken far from her Lemhi-Shoshone homelands in southwest Montana and eastern Idaho.

The Shoshone were known for their collection of horses, but they were also bullied by other Indian tribes, particularly the Hidatsa and Blackfoot. Sacagawea was eventually sold to a French fur trader named Touissaint Charbonneau.  She was his second Indian wife and they wintered at the Mandan Villages in 1804 alongside the Corps of Discovery. Sacagawea was pregnant and Lewis delivered her baby only weeks before they set out for Montana. Her Shoshone heritage proved a godsend for the Corps. They needed horses once they reached the Missouri headwaters and the Shoshone were the dealers from whom to buy. But to get Sacagawea, the Corps had to hire Charbonneau too (whose his skills, attitudes and contributions proved far less desirable).

Many historians now believe Sacagawea and baby Jean Baptiste centered the young, rowdy explorers (who were prone to find trouble) and brought peace. And the presence of a woman and baby leading a pack of men calmed the Indian tribes they encountered. Indian women didn’t accompany their men into battle. Sacagawea’s presence (with child) was like a “white flag” of peace. It’s likely why many tribes embraced these white explorers.

In fact, the only serious scrape with Indians happened on the return trip, when the expedition broke into three different groups. That’s when Lewis encountered the dangerous Blackfeet Indians on the eastern edge of present-day Glacier National Park. It’s the only time the expedition fired a shot. On that day two Blackfeet Indians laid dead. And where was Sacagawea? She was with Clark on the Yellowstone river.

Sacagawea also helped Lewis and Clark to find her Shoshone people. She taught valuable skills for food foraging, helped navigate difficult terrains and, on one occasion, saved equipment, food and their journals when her husband accidentally lost control of his canoe.

But Sacagawea wasn’t alone. There was a second Indian who likely served a larger role. She literally saved the Corps of Discovery from being murdered.

She was an elderly Nez Perce woman who was present when the starving Lewis and Clark expedition stumbled down the backside of the Bitteroot mountains into the hands of her tribe. The entire expedition was nearly dead. Sick. Hungry. Weak. Desperate. The Nez Perce had never seen white men before and the younger braves wanted to kill them all. After all, the Corps were traveling with the latest in weaponry, plus caches of bullets, boxes of trading goods and other riches. A hostile takeover of the Corps’ goods would make the Nez Perce rich beyond measure.

But that’s when Watkuweis spoke up and stopped her own warriors from killing the Lewis and Clark party. Her words were simple: “Do them no harm.” Why would Watkuweis care so much for a starving group of white explorers? It’s because she knew their generosity and compassion well. Like Sacagawea, she had also been captured as a youth, abused and traded among Indian tribes in Canada.

Eventually Watkuweis was purchased by a kind white fur trader who took her far away to the Great Lakes region. She was raised in a white community, learning white customs, manners and their Christianity. A white (Christian) family eventually helped her escape slavery and return to her Nez Perce home in the Rockies. Consequently, all her life, Watkuweis held a deep affection and gratitude for white people.

For Lewis and Clark’s Corps of Discovery, this old Indian woman was their saving angel.

Because of Watkuweis’ order to not harm Lewis and Clark, the Nez Perce formed a deep friendship with the white explorers.

They taught the Corps of Discovery new skills, introduced new foods (including salmon), cared for their horses, and showed them how to get to the Pacific ocean.

But there’s a final twist worth noting.

Those Nez Perce Indians, because of their positive experience with Lewis and Clark, were introduced to a “little black book” (Bible) that could show them the way to God. In 1831, four Indian chiefs (two Nez Perce, two Blackfoot) traveled to St. Louis to visit an aging William Clark about this “book.” That interaction would inspire a missionary movement to the Great Northwest, carving what we now know as the Oregon Trail.

God works in surprising ways. In this particular legendary tale through two women–one young and one old–who kept the Lewis and Clark expedition alive, moving forward and successful in their search for a Northwest passage.