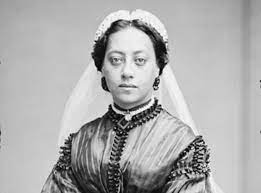 She was Black America’s first self-made millionaire. The most powerful woman in San Francisco’s Gold-Rush period. She was a “one-woman social agency” for emancipated Blacks.

Her name was Mary Ellen Pleasant…and her legendary story is simply unbelievable.

Born in 1814, we know little about Mary Ellen’s youth because she told different tales to “please her audience or justify her behavior.” Some say she was born a slave. Others the daughter of a rich Virginian or an Hawaiian merchant or even a Caribbean voodoo priestess. We do know her enslaved mother went missing as a young child. That’s when Mary Ellen became an indentured servant for an abolitionist Quaker family (the Husseys) in Nantucket, MA.

As Pleasant grew up, she worked Hussey’s store and, despite little education, used the experience to hone her business, communication and people skills.

Around 1840, Pleasant, no longer in servitude to the Husseys, moved to Boston. She married James Smith shortly thereafter. Her new husband was a staunch abolitionist. As a result, Mary and James worked together to transport former slaves through Boston via the Underground Railroad. They attended Anti-Slavery Society meetings. They worked with William Lloyd Garrison, who published the abolitionist newspaper The Liberator.

When James died (after four years of marriage), he left Pleasant a small fortune. She used that nest egg to continue her clandestine service for the Underground Railroad. She was deeply committed, but eventually the work proved too dangerous for a single Black woman. Around 1848, she met and married John James Pleasant.

In 1849, hundreds of abolitionists (including Mary Ellen) emigrated to California, some to seek gold and others to ensure the Golden State remained safe and free for Blacks. After all, many Blacks were striking it rich in the gold fields…and soon Pleasant would find her wealth too.

With leftover money from her first marriage, Pleasant began trading in silver and gold.

She also hired on as a domestic housekeeper for wealthy San Francisco men. From conversations (many overheard and some direct), Pleasant launched a slough of businesses, including laundries, boarding houses, livery stables, dairy farms, loan offices and even brothels. Pleasant helped found the Bank of California and multiple restaurants. Meanwhile, her husband John worked as a ship cook and was often at sea.

During her 30-year marriage and stint in San Francisco, Pleasant became exceedingly wealthy.

And the more she made, the more she gave away. She continued to anonymously fund the Underground Railroad, as well as underwrite housing and jobs for former slaves. Pleasant established safe houses for runaway slaves and paid the legal fees for Blacks being extradited back to slavery.

Between 1857 and 1859, Pleasant returned east to help raise money for the abolitionist John Brown. When Brown was hung for murder and treason, due to his part in the Harper’s Ferry incident, an anonymous note was found in his pocket: “The ax is laid at the foot of the tree. When the first blow is struck, there will be more money to help.”  Years later, Mary Ellen Pleasant confessed to penning that note. She also revealed how she gave Brown’s operation $30,000 (nearly a million dollars today).

Pleasant also helped women—of any ethnicity. She housed and clothed them. She taught them manners. She even arranged marriages. At the end of the Civil War, Pleasant stopped working as a housekeeper to fully devote her life to Black civil rights.

By 1875 Pleasant’s investments and businesses had made her a millionaire thirty times over (nearly a billion dollars today). With her great fortune, Mary Ellen eventually retired to a quiet life in her San Francisco mansion. Although always friendly, she often refused opportunities to share her story out of respect to people she knew and served.

On January 11, 1904, Pleasant passed away. Her life a testament to hard work, charity and Black civil rights. She literally lived up to her name.