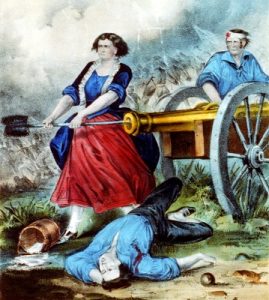 These were all great women of the American Revolution.

But have you heard of Mary Ludwig Hays?

She might be the bravest, strongest and most patriotic woman of them all.

During the Revolution women were cut from a different cloth.

Many women refused to stay home, hide or run from the British armies. Rather, they joined their husbands as “camp followers” and moved with their spouses throughout the war. They served as cooks, laundresses, nurses, counselors, and pastors . Women loaded guns, sharpened swords and worked artillery. They carried water to quench thirst and cool hot cannon barrels. They dug graves.

Mary Ludwig Hays was one of those women.

Born October 13, 1754 in Trenton, New Jersey, she grew up in a modest butcher’s home. Because Mary was a poor girl, it’s possible she never learned to read or write. In 1777, she married a Pennsylvanian barber named William Hays, but their honeymoon was short. Her new husband joined George Washington’s army and moved to Valley Forge.

George’s wife was also a “camp follower.” Martha mentored younger women like Mary in matters of duty, work ethic and faith. They would need all three qualities in the brutal winter of 1777-1778. Many soldiers never made it through Valley Forge. Poorly equipped, many soldiers died from frostbite, hunger and sickness. It was strong women like Mary and Martha that kept the troops’ spirits up, attended to their needs and prayed for their souls.

The most menial, yet critical, responsibility for women was transporting water to thirsty troops (in a pitcher).

The ladies also transported water to cool cannon barrels heated by their firing. It’s how Mary picked up a new nickname. Whenever a soldier yelled “Molly Pitcher” that was Mary’s cue to bring water.

One hot day in June 1778 at the Battle of Monmouth, Mary “Molly Pitcher” Hays found glory.

According to one historian, fifty soldiers died of thirst alone on that day. Mary carried bucket after bucket of water to the front lines, bravely dodging bullets and cannon fire. Mary’s husband William was working the cannons until heat exhaustion got the best of him. When he collapsed in the searing sun, Mary was there to attend to him…and take his place on the firing line. She fearlessly grabbed the ramrod and started loading cannonballs while bullets whizzed around her.

At one point a British cannonball literally passed between Mary’s legs, tearing off part of her skirt. But she never flinched. She relentlessly loaded cannonballs, encouraging the troops and standing her ground. The inspired soldiers began to call her “Major Molly.”

Her bravery and bravado also caught the attention of her commander George Washington (whom she revered). All day long Washington watched Mary work those cannons and keep the troops motivated. It impressed George enough to issue an official battlefield commemoration and make Mary a non-commissioned officer–a notoriety few women in that day received. After the War, poets would recount her bravery in rhyme and verse. There was even a song sung to her honor:

“Moll Pitcher she stood by her gun,

and rammed the charges home, sir,

And thus on Monmouth’s bloody field,

a sergeant did become sir.”

After the war, Mary and William returned to Carlisle, PA to raise their son. But that bliss also didn’t last. Mary’s life turned sour when her husband unexpectedly died in 1786. For the next 46 years, Mary faced poverty, hardship and pain. She remarried a man named John McCauley in 1793 but the marriage was bad. Her new husband was violent and abusive. After he persuaded Mary to sell her deceased husband’s land, he ran off with the money. This was her inheritance and it pushed Mary into poverty. Nevertheless, she didn’t let that theft steal her joy.

For the rest of her life, Mary lived lean as a general servant and civil volunteer.

Mary cheerfully cooked, cleaned, washed and painted. She cared for soldiers, sick people and wayward children. She faithfully attended the Lutheran church. In Carlisle, PA Mary was a legend, popular and respected. To her friends she was known as “Sergeant Molly,” the hero of Monmouth with “a kind word for everyone.” The U.S. government even recognized her Revolutionary War service with a modest pension.

Her grave marker tagged her as “Molly McCauley.” But everyone else, including many early historians, dubbed her “Molly Pitcher.” To this day, a statue of “Molly Pitcher” working a cannon adorns her Carlisle cemetery. Her glorious story has now grown dusty. Few school children learn her tale or know her name. But where ever patriot men march to war, the Molly Pitchers still follow.