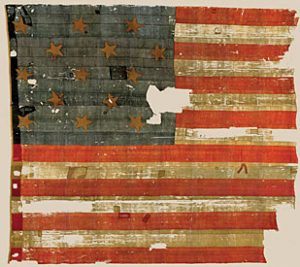 The late summer of 1814 was one of America’s darkest moments.

The British-American War of 1812 raged into its third year.

On July 25 the Battle of Lundy’s Lane near Niagara Falls proved a bloodbath victory for the British. On August 12 the USS Somers and Ontario warships were captured. Two weeks later Washington D.C was torched, including America’s Capitol, the White House and several federal buildings.

The war-weary Americans were hardly finished. And their Faith remained strong.

At the genesis of the War of 1812, President James Madison issued a National Day of Prayer to “acknowledge transgressions” and “seek [God’s] merciful forgiveness.” A year later, on July 23, 1813, Madison issued a second prayer decree. The entire United States, still less than a quarter century old, stopped to pray.

In early September of 1814 the British set their sights on Baltimore.

To house and feed their troops the Red Coat armies often occupied American homes, seeking to intercept American intelligence. On one such occasion, British operatives met Dr. William Beanes. Initially the elderly physician cooperated with the British. He obviously said too much, as the British soon suspected the good doctor of spying. Beanes was arrested and jailed on the British H.M.S. Tonant. He was likely headed for a noose.

But Dr. Beanes had friends in high places.

A group of Maryland friends, including a certain 33-year-old ambitious lawyer named Francis Scott Key, came to his defense. Key, using his connections to Madison, sought a prisoner exchange for Beanes. On a predetermined day, he and a military exchange agent named Col. John Skinner met the British on the Tonant. And while the negotiations were successful, a new problem emerged. The British planned to attack Baltimore that night. And now the Red Coats felt Key and Skinner could foil that plan. Consequently, the young lawyer, along with Col. Skinner and old Doc Beanes, were sequestered to a British ship–ironically called the H.M.S. Surprise–anchored outside Baltimore.

For the next 25 hours the British military bombarded Fort McHenry. 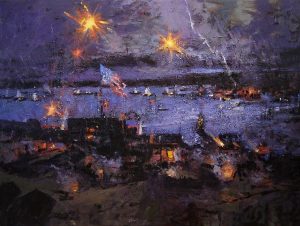 The detained Americans watched helplessly from the ship’s bow.

They witnessed the full power of the British navy, as nearly two thousand rockets, mortar shells and cannon balls rained down on their beloved Baltimore. When night fell, the locals snuffed every flame, to create utter darkness. Only in the black of night did the British struggled to aim their guns.

If Fort McHenry and Baltimore were to survive, it would take a miracle.

As always, the Americans turned to prayer for protection. And this part of the story is often missed…because God answered those prayers with a miracle.

During the night a violent early fall thunderstorm rumbled through Maryland. The lightning was particularly fierce, initially favoring the blind British firing into the dark. However, the torrential rain soon helped the Americans even more. Cannonballs are designed to “skip” and travel a distance (creating as much damage as possible). However, the pounding rain softened the Maryland ground, causing these heavy iron balls to sink, harmlessly, in the mud upon impact. Unless there was a direct hit, little damage was done.

Between the British bombardment and the terrible thunderstorm, it was one long night for the citizens of Baltimore. 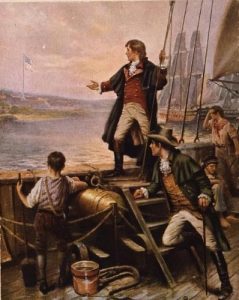 It was even longer for Key, Doc Beans and Col. Skinner. Only when the faint light of dawn broke into the eastern sky did the tired Americans finally see the truth.

They leaned against the railings of the Surprise, and searched the horizon for signs Fort McHenry and Baltimore survived the terrible bombing. Was the fort and Baltimore still standing? Would a British flag fly over the great fort? Would Baltimore be captured and occupied?

That’s when Francis Scott Key, a devout Christian, pulled out his journal and began to write a poem.

O say, can you see by the dawn’s early light

What so proudly we hail’d at the twilight’s last gleaming?

Whose broad stripes and bright stars through the perilous fight

O’er the ramparts we watch’d were so gallantly streaming?

And the rocket’s red glare, the bombs bursting in air

Gave proof through the night that our flag was still there

Key penned four stanzas that day, and buried in the final verse was a Divinely Providential line that became America’s national motto:

O thus be it ever when free men shall stand

Between their loved home and the war’s desolation;

Blest with victory and peace, may the Heaven-rescued land,

Praise the Power that hath made and preserved us a nation!

Then conquer we must, when our cause it is just;

And this be our motto ‘In God is our Trust!’

And the Star Spangled Banner in triumph shall wave

Over the land of the free and the home of the brave!

In God We Trust. It was the only path to freedom for a young American nation. The Americans battled the greatest army in the world and faced terrible odds. They endured horrific losses and needed an Anchor for the dark night of the soul. The patriots needed God’s Provision and Protection.

Key would later write: “Nothing but Christianity will give you the victory. Until a man believes in his heart that Jesus Christ is his Lord and Master… his course through life will be neither safe nor pleasant. My only regret is that I was so long blinded by my pleasures, my vices and pursuits, and the examples of others that I was kept from seeing, admiring, and adoring the marvelous light of the gospel.”

As for Key’s poem about the bombardment of Fort McHenry, it was eventually set to music. The tune, ironically, was by a British composer named John Stafford Smith. The Navy first played the song in 1889. Twenty-seven years later Woodrow Wilson officially used Key’s song as president. But it was baseball’s 1918 World Series that gave the song popular appeal.

On March 3, 1931, Congress made the song our national anthem.

Meanwhile, Key’s use of the phrase “In God We Trust” first found traction during the Civil War by Union soldiers. That’s when a two-cent coin carried first carried the motto. Nearly a century later, President Dwight D. Eisenhower signed legislation making “In God We Trust” our national motto and printed on all U.S. currency.

And to think both the National Anthem and motto came from the same story and the same source. It was born from a miracle thunderstorm in a dark night of bombing. And it’s also the only national anthem that ends in a question mark.

Oh say can you see?

…In God is our trust.