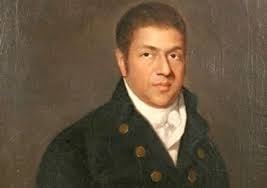 “Let me pass away quietly.”

He was the son of a freed Ghana slave (father) and a Wampanoag Indian tribe (mother). He taught himself to read and write and do math. He also self-learned marine navigation. In 1772, Cuffe inherited his family farm (due to his father’s death). He was only 13 years old.

Cuffe grew up to be a rich and highly lucrative shipper. His black-only crews sailed the Caribbean and Atlantic, and, as their captain, he had a keen ability to successfully navigate British blockades. Eventually the British caught up to Cuffe. In 1776, he was arrested and imprisoned by the British.

In 1783, Cuffe married a Wampanoag widow named Alice Abel Pequit and built an “Indian-style” house near Dartmouth, MA. Together, he and his wife raised seven children. The same year as his nuptials, he persuaded the Massachusetts state legislature to allow free blacks to vote.

Paul Cuffe was a dedicated Christian of the Quaker faith. He was widely known for his speaking abilities and loved to share his Christian testimony. During the War of 1812, despite suffering great financial losses, he founded a “society” to provide money to freed slaves so they could build homes in Africa. Between 1811 and 1816, Cuffe personally transported dozens of free black families from Massachusetts to Sierra Leone. He also personally funded their new African economy and worked for its national success. In fact, it’s possible without Cuffe’s money, the new nation of Sierra Leone might never have survived.

With a personal net worth over $500,000 ($11.3 million today), Cuffe lived comfortably on his 116-acre farm in Dartmouth, MA. He remained deeply committed to his faith, the abolition of slavery and to education of blacks all his life, but not just “blacks only.” Cuffe always believed in racial integration, thanks to his mixed Indian-Black heritage. In fact, he established the first racially integrated school in the United States (Westport, MA). He was also the first black American to meet with a U.S. President in the White House (James Madison).

Cuffe died in early 1817. Henry Noble Sherwood penned one of the earliest biographies about his life and summarized: