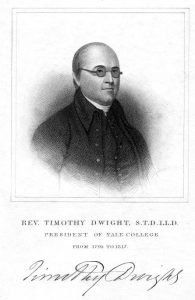 On July 4, 1798, TIMOTHY DWIGHT, the President of Yale College gave an address titled “The Duty of Americans at the Present Crisis.”

It was a stinging indictment upon the French Revolution and their enlightened, secular culture.

Dwight particularly noted how the infidel Voltaire had orchestrated the plan to convert Christian France into a secular state. By the time of Dwight, France had devolved into a cultural sewer, culminating with a “Reign of Terror” that slaughtered over 340,000 people. That’s the legacy of secularism, Dwight preached.

Not surprisingly, Voltaire’s progressive plan to eradicate Christianity in France sounds rather familiar, especially to Americans over 50 years of age, who’ve watched it unfold in the United States:

In writing, art and music render Christianity “absurd and ridiculous.” Mock religion, morality and virtue. Music, in particular, can move a society. Use it to introduce new philosophy and theology. Create a new cultural tolerance to the profane.

Using political and judicial means, erode the religious foundation of the State (in the case of 18th century France, it was Roman Catholicism). Use progressive and liberal theology to serve your secular narrative until these entities are no longer needed, then remove them too.

Establish a new generation of “philosophists” (professors) to inculcate the emerging generations with secular, irreligious, anti-Christian ideas. Weaponize science, literature and history against the Bible and Christianity. The process begins in the university and moves to the local schools.

When these indoctrinated generations come of age, move them into political, social and ecclesiastical “awareness” against older generations. They are the only ones “right.” They dictate what’s “correct.” Devolve society into an “honor/shame” culture. Either follow the “narrative” and be accepted, honored and celebrated, or be shamed, protested and eliminated. Make everything about FEAR.

Create further doubt, contempt and division through books (the media of Voltaire’s day). Overwhelm the masses with THE (DESIRED) NARRATIVE. Emphasize feelings over facts. Shut down any opposing view. Never let a good crisis go to waste. Again, make everything about FEAR to control.

Voltaire created a “secret Academy” that doctored books, even forged them after an author’s death, to further his SECULAR NARRATIVE. He focused particularly on revising and erasing history. These books were then widely circulated at low price.

It’s why, as the Yale President Timothy Dwight pointed out, FRENCH CULTURE WAS IN CHAOS.

This was Voltaire’s wish. This was France’s fruit.

Dwight concluded with this warning to AMERICANS as they celebrated and feasted upon their July 4 independence in 1798:

“RELIGION and LIBERTY are the meat and the drink of the body politic. Withdraw one of them and it languishes, consumes, and dies. If INDIFFERENCE…becomes the prevailing character of a people…their motives to vigorous defense is lost, and the hopes of their enemies are proportionally increased …Without religion we may possibly retain the freedom of savages, bears, and wolves, but not the freedom of New England. If our RELIGION WERE GONE, our state of society would PERISH with it and nothing would be left which would be worth defending.”

Words, indeed, worth noting…and pondering in our day.

“The Duty of Americans, at the Present Crisis, Illustrated in a Discourse, Preached on the Fourth of July 1798” by the Reverend Timothy Dwight, D.D., President of Yale College (New Haven: Thomas and Samuel Green Printers, 1798)