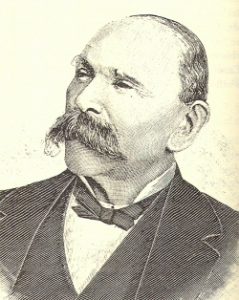 Robert James Harlan (1816-1897) may have been born a slave but he lived most of his life free as a bird. And this Ohio bird could sing…and travel…and succeed.

Born in Virginia on December 12, 1816. Harlan’s mother was mulatto, and his father was white. Consequently, Robert’s light-skinned complexion often helped him. As a young boy Robert was sold to James Harlan in Kentucky. Harlan raised Robert like one of his sons (and some biographers argue he was Jame’s son). Nevertheless, that fate proved fortuitous.

His adopted dad was a wealthy businessman, lawyer and politician who served on the national stage as a U.S. Representative from Kentucky (1835-1839). One of Harlan’s sons would later serve on the U.S. Supreme Court.

Robert—unable to attend school because he was Black—received his education from Harlan’s sons, who taught him their daily lessons.

Unlike many slaves, Harlan allowed Robert to move freely (and widely). He eventually granted Robert his full emancipation in 1848. In the meantime, Robert became a barber in Louisville and a storekeeper in Harrodsburg, Lexington and Louisville. At age 19 he started racing horses…and gambling…with great success. Robert eventually married and had five daughters.

In 1849, Robert caught gold fever and moved to California to open a trading store.

Once again, Harlan proved highly successful, building a $50,000 fortune ($1.8 million today). He then moved back to the East, this time north of the Ohio River and the growing city of Cincinnati. Using his gold earnings, Harlan flipped real estate and bought a photography shop (featuring several top photographers of his day).

Despite Robert’s “freedom” and 1848 emancipation, he still believed he was James Harlan’s slave.

The irony? By 1851 Robert was far wealthier than his owner and adopted dad. To put the matter to rest, Robert paid James $500 for his freedom. Robert was now a rich man…and growing wealthier by the year.

Harlan eventually moved to England in 1859 to race horses for the next decade. As a result, he escaped the bloody Civil War in America.

After the War, Harlan returned to Cincinnati for a most productive season of life during the Reconstruction era.

Robert served on Cincinnati’s City Council and as a colonel for Cincinnati’s Black state militia. As a Republican, Harlan was picked as a national delegate. This post led to high level political interactions with prominent Republicans, including Presidents Ulysses S. Grant and William McKinley. Harlan even served briefly in the Ohio State House of Representatives.

Robert Harlan was noted for his political opposition to segregated school and lynching.

He penned poetry and wrote newspaper articles. On September 21, 1897, Harlan died. Few Americans have lived a more colorful, active and diverse life than Robert Harlan. He started life as a slave, but finished as a political powerhouse in Ohio.