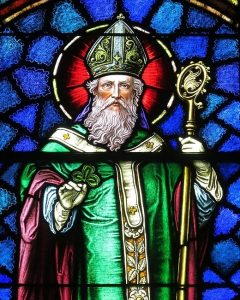 Who was Saint Patrick?” Why do we celebrate his name today? His legacy is much more than festive green parties and shamrocks.

Patrick was born around 385 BC in Britain during a tumultuous time.

At the time, Britain was under Roman rule and his family lived in constant fear. Because the great Roman army was needed back home in Italy, Patrick’s homeland was abandoned and vulnerable to invading tribes.

One of more feared and vicious tribes were the Irish Druids. These pagans were barbaric, malevolent and ruthless. They worshipped the dead, practiced dark magic and were known to collect human heads.

Around 405 AD, the adolescent Patrick’s farm was invaded by the Druids.

They pillaged the area, raped women, burned homes and fields and captured slaves. Patrick found himself in chains and headed to Ireland. For the next six years, the enslaved Patrick tended sheep. He also prayed daily for peace, strength, protection…and freedom. Sometime during this captivity, Patrick converted to Christianity.

One night Patrick had a vision about a ship.

In a courageous act of faith, he escaped his slave master and traveled two hundred miles to a port…and found a ship waiting. It was a miracle. Patrick returned to Britain, reunited with family, and tried to regain normalcy. But now a new vision emerged in his heart. A dream not to shepherd animals but to pastor people. Around age 40, God called on Patrick again: “Please, holy boy, come and walk among us again.”

God put Ireland back into Patrick’s heart and he followed a Divine dream for his life.

Patrick returned as a free man to pastor, teach and evangelize. He targeted, of all people, the pagan Druids he once feared and despised. To aid his pastoral teachings about the Christian Triune nature of God, Patrick employed a three-leaf clover (the shamrock). Just like the shamrock is “three in one” so is God, Patrick taught fearlessly. He endured assault and assassination. He face deep discouragement, poverty and hardship. But Patrick never quit. He penned: “I am prepared to give even my life without hesitation and most gladly for His name, and it is there that I wish to spend it until I die.”

Those who chronicled his work said Patrick healed the sick, scattered enemies, exorcised demons and even raised the dead. His walking stick reportedly grew into a living tree. Legend held that Patrick banished all the Irish snakes too! In his 30-year work in Ireland, Patrick baptized over 120,000 people and founded over 300 churches.

The irony? Patrick had great weaknesses. He was uneducated and struggled with his sinful self. Patrick stammered and stuttered. And he suffered from feelings of deep inferiority and terrible insecurity. But still Patrick worked, served, preached, taught and loved. He even advocated for the abolition of human slavery (unheard of in his time).

One biographer wrote: “He found Ireland all heathen and left it all Christian.” It’s true. When Patrick died on March 17, 461 the land that first imprisoned him in fear was now a citadel of faith.

Today, “St. Paddy’s Day” is reduced to green beer, shamrocks and Irish greetings but we best not forget the man (and his mission) who carved this date…even if some of the tales are more myth than truth.

Oh, and one more thing. Patrick never fully exorcised Ireland of the Druids. In fact, many of their death celebrations, magic rituals and pagan traditions were tattooed to the Irish. And, centuries later, when they migrated to America they brought not just “St. Patrick’s Day” but a holiday the Puritans, Catholics and other Protestants detested and originally outlawed: Halloween.