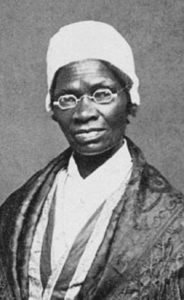 The Smithsonian Magazine named her among America’s “Most Significant” individuals.”[i]

She’s been commemorated on towers, highways, stamps, ships, monuments, and currency. A space rover and asteroid were named for her. Gloria Steinem initially considered branding Ms. Magazine in her honor. She was inducted into the Woman’s Hall of Fame (1981).

And yet her name and legacy remains largely unknown.

Her real name was Isabella Baumfree or “Belle.” She was born a slave sometime in 1797. At age nine, her master sold her for $100 and some sheep. Unfortunately, her new owner proved cruel, beating her daily with rods. Two years later Belle was sold again. And then again. Her third master raped her repeatedly and fathered a child. Belle was an angry adolescent, filled with shame, guilt, anxiety and fear.

In 1815, Belle fell in love with another slave, but the relationship was doomed. His master forbade the love affair. One day he caught them together and savagely beat her boyfriend. He would’ve died had Belle’s master not intervened. Nevertheless, she never saw her beau again. He died shortly thereafter. It was a tragedy that haunted Belle her entire life.

Eventually she married another slave and bore him four children. But Belle remained unfulfilled and increasingly angry. Even though New York state initially abolished slavery in 1799, it took decades for the practice to end on July 4, 1827. It no longer matter to Belle. She was done with slavery.

In 1826 she escaped with her daughter Sophia.

“I did not run off,” Belle recounted, “for I thought that wicked, but I walked off, believing that to be all right.” In her escape she met a devout Christian couple named Isaac and Maria Van Wagenen, who graciously boarded Belle and Sophia. In their care Belle had a transformative religious experience. She also learned her son was illegally sold into southern slavery. With the Van Wagenens assistance, Belle won the court case to get him back. It was the first time a black woman won a legal battle against a white man.

So she hit the road, speaking to anyone who’d listen. Her skill as an orator caught the attention of evangelists Elijah Pierson and Robert Matthews. Belle worked for both preachers, improving her communication skills. And then Pierson suddenly died and Matthews and Belle were accused of poisoning him. It wasn’t true. Belle was eventually acquitted of the murder, However, she was now in her thirties. All she knew was the road and poverty. Eventually she migrated to New York City and spent most of her forties exhausting options.

So she went to church. It was Pentecost Sunday, the day the Christian church was born. It proved a day that would forever change Belle too.

In a moment of fiery spirituality, Belle rediscovered her Calling to preach the Word. She had nothing to lose. She packed her belongings in a pillowcase and hit the road again, living off the kindness of New England strangers. That’s when she met abolitionists William Lloyd Garrison, and Frederick Douglass. Garrison published the anti-slavery newspaper The Liberator. He loved Belle’s story and eventually released her autobiography The Narrative of Sojourner Truth: A Northern Slave (1850).[ii] The book sold like hotcakes.

Belle was 53 years old. And suddenly she was “rock star” famous.

Except her name was no longer “Isabella.” As her book announced, Belle’s new name was “Sojourner Truth.” It was the moniker a Divine Voice told her to use seven years earlier on that Pentecost Sunday. For Sojourner that’s the day she left her bondage…to wander as a “sojourner” and preach the Truth of Jesus.

Sojourner was “born again” into a new mission.

She found her audience speaking against slavery and for women’s suffrage. Her speeches lit a flame that exploded into five alarm blaze. In 1851 Sojourner Truth spoke for a convention in Ohio and delivered her famous women’s rights speech “Ain’t I a Woman?” As she drew on her slave story, the audience reportedly “[beamed] with joyous gladness.” It remains one of America’s most famous speeches.

In her elder years Sojourner Truth tirelessly gave thousands of messages on abolition, women’s suffrage, prison reform, alcohol temperance, and property rights. She was as popular as Frederick Douglass on the speaking circuit, with both black and white audiences. During the Civil War Sojourner recruited black Union soldiers, consulted for President Lincoln and assisted newly freed slaves. She advocated for former slaves to be granted land in the West. She wrote war songs. As a Republican she campaigned for Ulysses S. Grant.

She had done more for her people, and for her country, in her final three decades than most people do in a lifetime. Frederick Douglass eulogized: “Venerable for age, distinguished for insight into human nature, remarkable for independence and courageous self-assertion, devoted to the welfare of her race, she has been for the last forty years an object of respect and admiration to social reformers everywhere.”[iii]

Her devout Christian faith guided her life and mission.

She always preached the gospel to anyone who’d listen. And no matter the topic or audience, Sojourner started every message with ten words: “Children, I talk to God and God talks to me.”