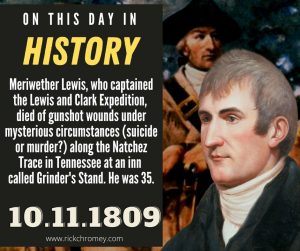 He led one of America’s greatest expeditions and proved the apple of Thomas Jefferson’s eye.

To this day the name Meriwether Lewis sells books, inspires audiences and provokes pride. His leadership of the Corps of Discovery, along with William Clark, remains one our nation’s most enduring tales. In his post-expedition years he enjoyed fame and fortune, and a cushy job as the governor of the newly-minted Louisiana territory.

And yet, in the fall of 1809, a lot of things were going wrong for Meriwether Lewis.

He was physically ill, some say due to malaria and others claim because of syphilis, both likely consequences of his journey to the Pacific. Emotionally, he was a lonely guy who struggled with relationships–whether it was the failure to find a wife or work with the political powers in St. Louis and Washington. Even his most ardent supporters and personal friends–Thomas Jefferson and William Clark (who governed along side him in St. Louis)–were losing faith in his abilities. Lewis was tasked with preparing the expedition journals for publication in 1806. Three years later he had yet to pen a single word.

And then, in 1809, the Madison administration audited Lewis on his gubernatorial expenditures. He was spending unauthorized funds and his invoices for reimbursement were denied. This news shocked Meriwether Lewis, as it could mean financial ruin. He faced not just bankruptcy but also scandal. Lewis’ reputation, honor and legacy were all at stake.

To make matters worse, Meriwether Lewis was hitting the bottle.

As a young man he was known in the socialite circles of Washington and Philadelphia to imbibe too much. The Expedition hauled 18 barrels of whiskey up the Missouri and it didn’t last long. After his return to the States, Lewis and Clark enjoyed balls, parades, galas and other events in their honor. Lewis, in particular, enjoyed these parties…perhaps a bit too much. His friends noted that he was not just drinking…but drinking heavily.

Lewis was also sporting an opiate addiction. He was self-medicating on pain killing powder. While it’s speculative, his addiction could be rooted to a painful gunshot wound in his buttocks in the waning weeks of the return voyage from the Pacific. Lewis was shot by one of his own men (Pierre Cruzatte)–the nearly blind fiddle-player and river man–who somehow thought Lewis was an elk. The shot could’ve killed Lewis but instead only wounded him. Nevertheless, for the next several weeks, the Captain had to lie on his stomach in the canoe due to the pain of sitting upright. As the medical doctor for the Corps he had access to the drug cabinet and the Corps had plenty of opium on board as a pain reliever. Could this incident be the genesis for an opiate addiction? Possibly.

His plan was to argue his expenditures before James Madison himself. However, there were signs that he was mentally unstable. He penned a will only a week after his departure and then arrived at Fort Pickering on September 15, 1809 drunk and under a suicide watch. Lewis spent the next two weeks in quarantine to dry out. During that time he penned a confusing and messy letter to Madison.

While the commander of the fort–Capt. Gilbert Russell–wanted to accompany Lewis to DC, a Maj. James Neelly was assigned as an escort. On September 29, Lewis and Neelly, along with his personal attendant John Pernier and another servant, set out for the famed Natchez Trace trail that ran from Mississippi to Tennessee.

On October 10, two the horses carrying important documents had strayed and were missing.

Neelly knew the area and stayed behind to round them up. Lewis and is two servants ventured ahead. By this time, Lewis was drinking again and likely dipping into the opium. A sad irony is that Maj. Neelly was known for his drinking too. Could the person assigned to escort Lewis be the one who reignited his alcohol addiction?

For whatever reason, Lewis arrived ahead of his two servants at Grinder’s Stand on October 10, 1809. He rented a room from Priscilla Grinder and settled in for the night. Mrs. Grinder’s husband was away on business and she quickly became suspicious, even fearful, of her new guest. Lewis was acting strangely and erratically. He didn’t want a bed but rather desired to sleep on his buffalo robe. She noted he was drinking that night and musing about William Clark coming up the trail soon. She could hear him debating a case in his room. She became so fearful of his “mental derangement” that she opted to sleep next door. John Pernier and the other servant also stayed in a nearby cabin.

Around 3 a.m. Priscilla Grinder heard two shots shatter the early morning silence. She saw nothing outside but Lewis staggering back to his cabin. Remaining fearful she rendered no aid, even though she heard Lewis cry out for help. At dawn she awoke his servants and they entered the room to find Lewis on the floor, still alive. They saw two wounds, one in his forehead and the other in his side. Lewis, again, asked for water and for Pernier to use a nearby rifle and finish the job. Pernier declined.

His final words were cryptic: “I am no coward, but I am so strong, so hard to die.”

Later that morning, Maj. James Neelly arrived with the stray horses to learn that Lewis was dead. Both Priscilla Grinder and John Pernier stated the cause of death was suicide. Meriwether Lewis had used two flintlock pistols to “do the deed.” Neelly gathered Lewis’ personal effects, buried him nearby and wrote a letter to Thomas Jefferson that Meriwether Lewis was dead “by suicide.” Jefferson received that letter a week later on October 18, 1809.

William Clark was on the road with his wife Julia, and in Kentucky at his brother’s place in Louisville, KY when he heard the news…by way of a newspaper on October 28. His response echoed what he hoped was not true: “I fear O! I fear the weight of his mind has overcome him.” For Clark, he knew Lewis’ sour dispositions and depressive moods. He knew his partner was in bad shape when he left St. Louis a month earlier. It was sad news to hear of the suicide of his friend…but it was not surprising news.

In the weeks, months and years after Lewis’ death there were investigations and reports into what happened that night…and all concluded that Lewis died “by his own hand.”

Gilbert Russell, the captain at Fort Pickering, issued an 1811 report to the American Philosophical Society (the same think tank that resourced Lewis with insight for his journey west). Alexander Wilson interviewed the Grinders, toured the area and viewed Lewis’ grave…also released his report in 1811.

And while there were some who suspected foul play, the evidence, testimony and general and national assessment seemed to agree: Meriwether Lewis was capable of suicide. His depressing circumstances, his addictions, his melancholy and emotional detachments, his failures to produce, his political oppositions, his two previous suicide attempts…were all enough to drive a man both mad…and to the grave.

Thomas Jefferson was also not surprised by Lewis’ suicide.

He knew Meriwether well. The Jefferson and Lewis families lived near each other. Lewis was mentored by Jefferson and a father figure to him. Jefferson penned that Lewis “had from early life been subject to hypochondriac affections. It was a constitutional disposition.” Jefferson also observed that when Lewis lived with him in DC that he “observed at times sensible depressions of the mind.”

It would seem, given the clear history and testimonials, that we have the full story. However, since the mid-19th century, the speculation of “murder” has continued to bubble. And for good reasons. There are serious issues that seemingly undermine the integrity of the eyewitnesses.

The problem is no argument is iron-clad for how Lewis died.

The historical and origin narrative of SUICIDE does have holes, but many of these can be explained.

Yes, Priscilla Grinder embellished the story in 1839–three decades after the fact, and now as an old woman–but she continued to state the basic facts of that night for suicide. If she was growing senile, that would explain the embellishments, but it also affirms the suicide narrative. Senility causes a person to forget the lies just as much as the truth. If she had been lying all these years, senility would’ve brought it out. And if she’s not senile, nothing has changed (but a few embellishments): Meriwether Lewis committed suicide.

The idea that John Pernier, fingered by Lewis’ mom as suspicious, was quickly shot down…by Lewis’ own family. Pernier was never a serious suspect because the Lewis family rejected and denounced Lucy Marks suspicion of Pernier…who was a deeply faithful and trusted servant to Lewis.

As for Maj. James Neelly, he clearly wasn’t the best person to escort Lewis to DC. And he did retain some of Lewis’ possessions because Lewis also owed him money. Why he chose to buy Lewis in a shallow grave instead of taking him to Nashville will remain a mystery. However, in that day and age, it was not unusual to do what Neelly did. He was a military officer with other work on his plate. His job with Lewis was over the moment Lewis died. Neelly completed all the paperwork, finished the burial task and was on his way.

In the end, there’s no compelling reason to revise the story toward a murder plot.

First, because there’s no evidence of murder. There’s only speculation and imagination.

Second, there’s no attractive plot nor suspect for murder. While Lewis had political opponents that might have wanted him dead, they could’ve done that deed easier in St. Louis. If James Neelly wanted Lewis dead it would’ve been easier to kill him in the woods (without witnesses) than in a notable inn along the Natchez Trace (with witnesses). Priscilla Grinder had no reason to lie or cover up. John Pernier was too loyal. The only other suspects would be Natchez Trace thugs bent on theft and murder. And yet there were no other sounds or sights on that moonless night. No whoops or hollers. No torches. No horses galloping away.

Only two shots in the dead of night.

Leaving Meriwether Lewis in the final hours of his life.

Ultimately, the Captain does prove “so hard to die.” And so doe his legacy,  leadership and life.

Meriwether Lewis likely died of suicide. But that doesn’t change his national influence.