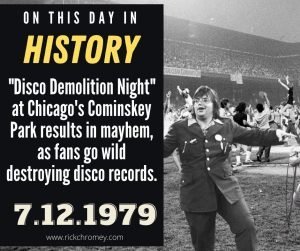 In the late 1970s, there was only two opinions about a popular dance craze known as “disco.” It was either the best thing since the jitterbug or the worst thing since the Hindenburg. Very few had a view in the middle.

For the critical ear, the monotonous beat, synthesizer hooks, flourishing strings and banal, often repetitive lyrics created a candy-coated music that, thankfully, had little staying power. Most “disco” songs proved forgettable tunes until they’re needed in a period piece movie or retro 70s birthday party for the geriatric set. If it wasn’t for “Saturday Night Fever” in 1977, disco might’ve remained a minor musical genre, but thanks to the Brothers Gibb (or Bee Gees)–their falsettos, coiffed hair and danceable music–the craze began.

America was doing “the hustle” and hanging out in trendy hot spots like “Studio 54.” Disco balls, platform shoes, white leisure suits and dance moves like the “pump,” “New Yorker” and “Disco Duck” were popular. Disco emerged out of the black fusion of soul, r&b and funk in the early 1970s through bands like the Trammps, A Taste of Honey and Earth, Wind and Fire, but it was a white guy named “KC” and his Sunshine Band that gave disco it’s “That’s The Way I Like It” blessing (1975). Another “white” one-hit wonder band known as “Wild Cherry” also helped to “play that funky music (1976).”

After 1977 and “Saturday Night Fever,” disco music was everywhere, launching new careers (or reviving old ones) for Donna Summer, Sister Sledge, Chic, Village People and Ohio Players. Even mainstream rock artists, to the disappointment of their fans, churned out their disco songs, including the likes of Queen, the Rolling Stones and KISS. Thankfully, these forgettable songs are just that.

By 1979, disco faced its Waterloo. The growing backlash and “Disco Sucks” hatred was growing to a fever pitch. Perhaps it was the emerging punk movement in Great Britain, the musical antithesis to disco. Maybe disco was a victim of its own success (anything “white hot” burns out rapidly). Or maybe its because the music was truly that forgettable.

Whatever the reason, the disco era pretty much ended in a base “brawl” game in Chicago on July 12, 1979. That’s the night that White Sox fans hauled tens of thousands of disco records to the ball park to purposely destroy their music. It was planned as part of a double-header game but the second game on the twin bill never happened. Between games, the angry fans stormed the field, destroying more than just vinyl records by these disco artists. Fights broke out. Fires too. It was an ugly, sad and notable night. Disco wasn’t dead, but its days were numbered.

It was the close of the 1970s. The end of disco. In a year a new musical genre, also shipped in from across the pond, would capture the American ear: new wave. This music would explode thanks to a new cable television channel named MTV and disco would die on the vine as a new synth-pop dance music moved in to stay.