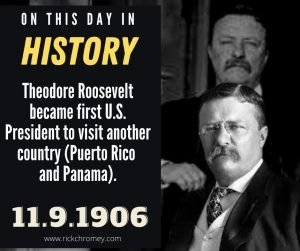 In our global culture and shrinking world–thanks to cyber communications–it’s hard to believe there was a time (120 years ago) when few people ventured more than a day’s walk (20 miles) from home.
That was the significance of this day in 1906. It was the first time a U.S. President visited another country…not by plane…but by ship for official state business. President Theodore Roosevelt traveled to Panama and Puerto Rico. His journey to Panama was to view the progress of the Panama Canal, which was in the process of being constructed. His next stop in Puerto Rico was to ease post-Spanish American War concerns involving the country’s future, and to encourage Puerto Ricans, now under U.S. sovereignty, to become U.S. citizens. The world was getting smaller.

As a result, Roosevelt moved the bar in how heads of State interacted with their subjects. But it took helpful new technologies for him to do so. Today both Panama and Puerto Rico can be reached within hours via jumbo jet. It took over half a month for Roosevelt to make his journey by sea. He was also aided by a new communications technology: the telephone.