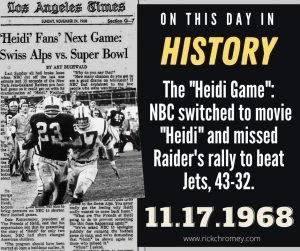 It was the football game that changed the rules of broadcasting.

It was the game that showed how the democratic, decentralized people’s voice could overrule the authoritative, centralized control of network brass. It was the game where a little girl in the Swiss Alps and superstar athletes toppled how we would watch live sports forever.

From the beginning of radio and television broadcasting, live sports were subjected to strict programming rules. Advertisers wanted their fair share of available air space. Networks wanted to create a broadcast matrix. The people wanted to listen and/or watch according to schedule. And “broadcast operations control” insured everything worked flawlessly. And generally it did. Even with scripted “live” television, there were marks and finishes.

Until the “Heidi Game” of ’68, it was common for live sports to shift to other previously scheduled programming when a game went long. But that didn’t happen much. Indeed, in regular season National Football League play, there were no overtime periods and ties were common. The NFL didn’t insert an “overtime” for regular season games until 1974. Overtime was common in basketball as well as extra innings in baseball, but these games were also played much faster. In fact, one of the reasons games stretched to three hours in length was due to television needing commercial space between innings. Consequently, if a game was going long, and they rarely did, the rule was to switch to “regular scheduled programming.” Even with breaking news, the viewer was shorted and forced to miss whatever content was played during the brief “break in” with news. Of course, if the “breaking news” was critical to the lives of the viewers, no problem. But “whoa Nelly!”…beware the ire when it wasn’t.

This was certainly true when the famous Heidi game was played between the New York Jets and Oakland Raiders.

Broadcasted by NBC, the game was viewed as a delightful revenge match from the previous year, a football game considered “one of the most vicious in Jet history.” The bitter rivalry featured two elite quarterbacks: the flamboyant, playboy Joe Namath and the cool Daryle Lamonica. To say these two teams hated each other would be an understatement. Frank Ramos, Director of Public Relations for the New York Jets quipped, “When the Jets played the Raiders, it wasn’t a rivalry. It was war.”

Indeed a war is exactly what NBC wanted. And network brass salivated with the knowledge that sports fans would enthusiastically tune in. To sweeten the programming schedule that Sunday, NBC slated the popular children’s film Heidi to immediately follow the game as a nightcap treat. Get the dads and sons in the afternoon, then bring in the moms and daughters for the evening.

On paper it seemed a perfect idea. In reality it proved a nightmare.

Between penalties and thrilling gameplay, the contest soon pushed the limits of its two-and-a-half hour televised time allotment. It was the game that NFL fans wanted, and NBC executives needed for ratings. At halftime the Raiders were winning 14-12. The game went back and forth until it’s final minute of play. With sixty-seconds remaining the Jets precariously clung to a narrow three-point lead, but the Raiders had the ball. It was going to be a fantastic finish. Sports fans were on the edge of their seats.

But there was a serious problem.

In the eastern time zone (where New York Jet fans lived), it was nearly 7 p.m. and that generated a conundrum for NBC executives. The Heidi movie was scheduled to start at 7 p.m. EST. As game play exhausted valuable time in the second half, and this “live” sporting event was certain to extend beyond the scheduled time frame, NBC brass debated (and eventually decided) to delay Heidi to let the game finish. However, that change in protocol never got to the supervisor of Broadcast Operations Control. The reason? Jammed phone lines. As the 7 p.m. hour neared in the Eastern time zone, NBC phone lines were inundated with inquiries from nervous both football fans and impatient preteen girls waiting for Heidi. The supervisor who controlled the switch couldn’t get past the busy signal.

At 7 p.m., just as the Raiders received the kickoff for their desperate final march to victory, NBC Broadcast Operations Control cued the closing football theme music and switched to the start of Heidi. The NBC brass went nuts. They thought word had been relayed to let this riveting game finish. Football fans, particularly in New York, also exploded with outrage. The irony? The programming decision only impacted those in the Eastern and Central time zones. Viewers in the Mountain and Pacific time zones happily stayed with the game. They had no idea that all hell broke loose in huge eastern and midwestern market cities.

In retrospect, it’s probably better the angry New York Jets fans never saw the ending. Amazingly, the Raiders scored not one but two touchdowns in that final minute of play. Bob Valli, a reporter for Oakland Tribune, penned that “Television missed one of football’s most exciting and exhausting minutes of emotion. In that minute, Oakland fans saw despair turn to delirium.”

Unfortunately, NBC made matters even worse.

Again, following protocols and as a public courtesy to jilted football fans, NBC posted a scrolling bulletin to report the Raiders had won the game. Unfortunately, NBC chose to make that announcement during one of the most pivotal, emotional points in the entire Heidi movie. And now Heidi fans across the nation were ticked. What was NBC thinking? Do they have no shame? The phones at NBC (and even local police departments) rang off the hook. It got so bad that NBC installed special “Heidi” phones to handle all the irate calls. There was even a very public apology.

In 1968 America was coming apart at the seams.

The Heidi game was indicative of the wider cultural change happening. It also capped a hard, desperate year for the nation. Arguably, until the year 2020, 1968 could be America’s toughest year. Martin Luther King, Jr. and Bobby Kennedy were assassinated. Riots broke out at university campuses as well as the Democratic National Convention in Chicago. Forty-six Americans a day were dying in Vietnam, now considered a lost battle according to Walter Cronkite. Race wars tore apart urban neighborhoods while “black power” athletes sparked controversy at the Summer Olympics in Mexico City. Richard Nixon was narrowly elected in a heated contest.

Americans were on edge, weary and seeking some relaxation. All they wanted was a great football game. What they received was more agitation and fury.

Neither television nor live sports broadcasting would ever be the same.

As for the New York Jets? They would avenge the Heidi game with a fantastic underdog win, several weeks later, over the heavily-favored Baltimore Colts in Super Bowl III, a win “guaranteed” by the brash Joe Namath.

In 1997, the “Heidi Game” was voted as the most memorable regular season game in NFL history.

Indeed it was…if you actually saw it.