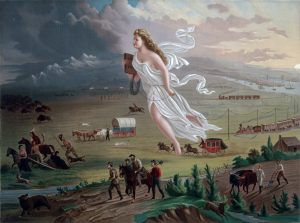 It’s nearly 300,000 acres of majestic, rugged land known as the Oregon Territory, a portion of the Louisiana Purchase of 1803. The infamous Oregon Trail snakes through this vast estate, connecting the Great Plains to the Pacific Ocean. Thousands of westward wagons once traveled its corridors and canyons, leaving behind etchings, belongings, and graves. Today it’s scored by interstates and roads, towns and cities.

But who started the trail? And for what reason?

The Oregon Trail story originates with four Indians—two Flathead and two Nez Perce—who traveled over two thousand miles to visit “their great father” William C. Clark. Clark and Meriwether Lewis had encountered the Nez Perce and Flathead Indians in their exploration of the Missouri and Columbia rivers in 1803-1806. In 1831, Clark was the governor of the Missouri territory and the agent to the Indians, to handle disputes, relationships, conflicts and other questions.

That’s why these four Indians came to faraway St. Louis to meet with Clark.

The Indians wanted to secure the “book to Heaven” that allowed people to “live forever with the Great Spirit.”

However their journey was not easy. They all got sick along the way. One died prior to arrival.

The remaining three Indians found Clark at his home. Upon learning of their quest, Clark kindly gave them a tour of town and showed them a cathedral…but offered no answers. When another two Indians died, the remaining chief desperately pled Clark for insight. Don’t send us back “blind…broken and empty,” he begged. A young man overheard this Indian’s request to Clark, wrote his words and mailed it back east to a friend. The friend shared the request with another friend. And then another. Eventually the Indian request was published as an article titled “Wise Men from the West” for the Christian Advocate journal (March 1833).

America, at the time, was in its “Second Great Awakening.” A period of great religious revival and fervor that spread like a wildfire across the young nation. Churches were full. Revivals were popular. Fresh forms of “non-denominational Christianity” and “restoration movements” (to restore ancient Christianity) were finding root. The Methodist church, thanks to its promotion of a program called “Sunday School”–that taught kids how to read and write through using the Bible–was particularly influential.

Consequently, when this article about Indians in the western frontier was published it caught the attention of those committed to missionary work.

A New York physician named Marcus Whitman was one of those inspired missionaries…and he was ready.

From his youth, Marcus wanted to be a clergy man. However, the schooling was too expensive and so he settled instead upon medicine. Nevertheless, this New Yorker hungered for the adventures of mission work. Consequently, in 1835, Whitman traveled with another missionary to Montana and Idaho to scope out the situation. They purposely visited the Flathead and Nez Perce tribes. From their efforts, some Indians converted to Christianity. The Nez Perce then invited Whitman to live among them and he promised to return.

Meanwhile another New Yorker in the east was excited about the news out West.

Narcissa Prentiss was a product of the Second Great Awakening.

All her life she felt called to mission work and attended Franklin Academy in Pittsburgh to prepare for that vocation. Then she met Marcus in 1835, after his return from the West. His convictions and stories inspired Narcissa…and they married February 18, 1836.

This time they blazed a new trail deep into the Oregon Territory along with another missionary couple named Henry and Eliza Spalding. Narcissa became the first woman to travel west of the Rocky Mountains,…and she kept a journal of her experiences. Once in Oregon country, the Whitmans established a mission north of Pendleton in Walla Walla, WA. The Spaldings moved north to establish a mission among the Nez Perce.

For the next decade the Whitmans lived, worked, and churched among the Cayuse tribes of eastern Washington.

They proved the perfect power missionary couple. As a teacher, Narcissa taught the Indians how to read and write. Meanwhile Marcus tended to their health, treating wounds, disease, and aging. Through their Christian service, the Whitmans evangelized a few Cayuse. Nevertheless, the work was difficult, exhausting and bore little fruit. Some of the Cayuse grew suspicious of the Whitmans–particularly Narcissa–when they limited access to particular rooms at their mission. Narcissa was tired of the fleas the Indians carried and did not want them inside the bedrooms. The Cayuse saw this stand as inhospitable.

Nevertheless their work was not in vain. The converted Christian Cayuse, increasing by the year, inspired the Whitmans to continue their work.

In 1842, Marcus returned east to Washington, DC to beg President John Tyler and other politicians to help them settle the Oregon Territory.

Christianity was spreading, Whitman preached, and there was great need for additional Christians to teach, lead, serve and comfort. The idea proved unpopular. Most easterners viewed settling the Oregon Territory as pointless. It was desolate, worthless…and few cared about the Indian. One southern senator chortled he “would not give a pinch of snuff for the whole territory.”

But Marcus was not deterred. Eventually President Tyler approved his request to fund a group of missionaries, and told the buckskin-clad Whitman: “your long ride and frozen limbs testify to your courage and your patriotism. Your credentials establish your character.” Whitman recruited a group of “Christian soldiers”–over 200 wagons and nearly a thousand people strong–to head back to Oregon along the path he had charted in 1836.

The “Oregon Trail” was born.

Soon their western route (and news of fertile land in the Willamette Valley [Portland, OR]) inspired additional wagon trains to form.

The Whitmans continued to work among the Cayuse…but now saw a greater need to serve the emigrant. They opened their mission and established a school for widows and orphans who had lost the fathers and parents along the Trail.

This shift in focus from the Indian to the emigrant didn’t sit well with the Cayuse. Their homeland was filling up with white people, many who came not to serve the Indians but start a new life on a patch of ground in Oregon. The Cayuse were slowly being pushed out of their native lands…and began to despise the Whitman Mission. It was a symbol of white aggression.

The Nez Perce, in contrast, favored Christianity and the mission work of the Spaldings. Chief Joseph’s father converted, and the famous “chief” was himself educated in a mission school. The Nez Perce had promised Lewis and Clark that they would never war against the white man and considered him a friend.

Nevertheless, it didn’t take long for gold-seekers, outlaws, frontiersmen, gamblers, and politicians with greed (not God) on their minds to spark problems.

In 1847 a measles epidemic spread through the area, infecting both the white and Indian (who had no immunity to this deadly disease). Marcus Whitman, at great risk to his own health, doctored both the infected white and Indian. While he had some success with the whites,. many of the sick Indians died from the disease. The Cayuse tribe–and their chief named Tiloukaikt–grew suspicious and angry. Their tribe, especially the children, had been decimated by measles and they blamed the “medicine man” Whitman. Some even spread false rumors that he intentionally infected the Cayuse to kill them off. According to Cayuse tradition, Whitman was a “healer who couldn’t heal” and needed to be eliminated.

On November 29, 1847, Tiloukaikt and a band of warriors massacred Marcus and Narcissa Whitman along with eleven other settlers.

The Cayuse then torched the buildings, destroyed property, and kidnapped dozens of women and children–holding them hostage for a month. This event sparked a manhunt and a conflict known as the Cayuse War (1847-1855). Eventually five Cayuse confessed to the crime and were tried, convicted and hung in Oregon City (1850).

The Whitman mission was gone.

But their legacy was not.

Twelve years later, a seminary to train ministers was established in Marcus’ name. Today that college still exists as Whitman College in Walla Walla, WA. In his youth Marcus dreamed of becoming a clergyman but family and money dissuaded him. Instead, he apprenticed medicine for two years to become a doctor. God used Marcus’ medical skills and Narcissa’s teaching abilities to serve the Indian. And while there are differing interpretations on the motives, methods and success of their mission, one thing cannot be denied.

Christianity is why the Oregon Trail was pioneered.

It wasn’t carved by gold seekers, outlaws or easterners seeking new land as much as by an army of Christians committed to serve, teach and nurse the Indians. They came to settle Oregon and Washington for God.

Many modern western histories miss this spiritual element. And too many historians blame all white men for atrocities against the Indian, but these claims lack merit. In reality, the West was also settled by Christians who came not for gold, land, power, or escape…but rather to selflessly evangelize, minister, and educate those in need…and that included the Indian. From Jason Lee’s Methodist mission in The Dalles, OR to Catholic missions like St. Ignatius in Montana, the mountain and Pacific Northwest was largely populated, from the beginning, by Christians sent to serve.

Ironically, a half century after the Cayuse burned down the Whitman mission, a remnant of Christian Cayuse invited another white missionary to come to their lands. His name was Jimmy Cornelison and this small in stature missionary proved rather popular. The Cayuse adored the diminutive pastor–nicknaming him “Little White Man.” Hundreds of people–Indian and white–converted to Christianity as a result of his long ministry in the Pendleton, OR area.

In 1923, President Warren G. Harding summarized this first emigrant expedition: “Never in the history of the world has there been a finer example of civilization following Christianity. The missionaries led under the banner of the cross, and the settlers moved close behind under the star-spangled symbol of the nation.”

Now that’s how the West was really won.