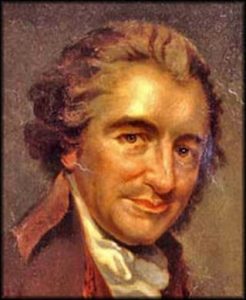 In 1776 Thomas Paine was a “rock star” among American patriots.

His writings inspired a loosely united thirteen colonies to revolt against the great British Empire.

But Paine lived down to his name. He’d die a “penniless drunk in Manhattan,” scorned by most of the Founding Fathers. Only six people attended his funeral.

He loved to challenge the status quo politically. It’s why his writings, like the best-selling Common Sense (1776) and The American Crisis (1776-1783), were the rage among American patriots. Few people were more famous than Thomas Paine during the Revolutionary War.

But Paine also had a way of wearing out his welcome. He lived in America only thirteen years, (arriving in 1774) before returning to his native England. In 1791, when his writings on the Rights of Man created controversy and eventually charges of sedition in Britain, Paine fled to France.

That’s where his notoriety caught the attention of French Revolutionaries. Paine was immediately granted honorary citizenship and elected to the National Assembly. But his French honeymoon also proved short. He “agitated” the wrong people, got arrested and sentenced to death. If it hadn’t been for French ambassador and future president James Monroe, who negotiated Paine’s release, his story would’ve end with the guillotine.

But Paine’s real agitation was just beginning. While in prison he began writing his skeptic’s view of religion titled The Age of Reason (published in three parts between 1794 and 1805). Thomas Paine was a religious skeptic, but no atheist. He still believed “in one God” and the “equality of man.” Nevertheless, Paine rejected every human religious creed, including Jewish, Roman Catholic, Orthodox and Protestant.

“My own mind is my church,” Paine wrote. It turned out to be a church few attended.

His friend Ben Franklin begged Paine not to publish The Age of Reason and warned: “I would advise you, therefore, not to attempt unchaining the tiger, but to burn this piece before it is seen by any other person; whereby you will save yourself a great deal of mortification by the enemies it may raise against you, and perhaps a good deal of regret and repentance.”

But the insolent Paine didn’t listen to Franklin’s counsel. Instead, he became even more antagonistic. In 1796 he maliciously attempted to impugn the character and competence of George Washington in a public letter. At the time no one was more popular in America than George Washington. In fact, many Americans desired to make Washington “king.” Consequently, the public response was swift.

Nearly every Founding Father called him out, from John Adams to John Jay. The Age of Reason was “blasphemous” (Charles Carroll), “absurd and insidious” (Benjamin Rush), “puny” (Patrick Henry) and “ignorant” (John Witherspoon). Founder Elias Boudinet was so incensed he penned his own refutation titled The Age of Revelation (1801).

Samuel Adams wrote Paine: “When I heard you had turned your mind to a defense of infidelity, I felt myself much astounded and more grieved, that you had attempted a measure so injurious to the feelings and so repugnant to the true interest of so great a part of the citizens of the United States…Do you think that your pen, or the pen of any other man, can unchristianize the mass of our citizens, or have you hopes of converting a few of them to assist you in so bad a cause?”

From that point forward, the irreverent, secularist Thomas Paine lived as a social outcast. He spent his final years largely in seclusion, nursing a flask of booze. And while his early works reflected “common sense,” Paine’s commitment to French enlightenment “wokeness” and secularism—something most people embrace today as normal and mainstream—was completely out of step in early 19th century America.

Paine’s secularism cost him everything. He literally reaped his surname: pain.

But not a single cemetery in America would accept his corpse. He was eventually buried, without ceremony by a few friends, on his farm outside Rochelle, NY. Ten years later his remains were exhumed by a journalist named William Cobbett and shipped back to his native England. Cobbett wanted to give Paine a heroic reburial, but it never happened. Paine’s bones ended up in his closet and eventually disappeared.

Shortly thereafter a rhyme to his Paine’s memory emerged:

“Poor Tom Paine! There he lies:

Nobody laughs and nobody cries

Where he has gone or how he fares,

Nobody knows and nobody cares.”

The “pain” of Thomas Paine is how far this patriotic “rock star” fell to earth. He was a man out of step with his culture. His ideas and lifestyle outside the cultural and religious norms of his day. It’s a hard story to understand in contemporary secular America (where a Thomas Paine easily fits), but in the era of a Second Great (Christian) Awakening, his deism and irreligiosity found no favor. Like many today he chose a life that became a pursuit of pleasure. But that pursuit, as the biblical Solomon once described, can be chasing the wind, resulting in a life framed by divisiveness, narcissism, emptiness, addiction and loneliness.

But ultimately the man who penned Common Sense proved in the end to have none himself.