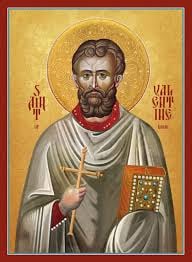 Valentine’s Day is February 14. It’s traditionally a day of love. But what’s the story behind the day?

A man named Valentine of Terni lived in the 3rd century AD.

It was a period of deadly plagues and severe Christian persecution. The great Roman Empire was starting its long disintegration.

With a small pox plague raging, killing 5000 a day and decimating his army, Emperor Claudius needed committed citizens and soldiers. So he outlawed traditional marriage, especially for Roman soldiers (thinking they fought better as bachelors). He then forced all Roman citizens to worship Roman gods, including deified emperors. The Christians, rapidly growing as an underground church, naturally refused and were declared enemies of the state. Consequently, they were thrown to lions, beheaded, gutted, dismembered and set aflame.Political chaos. Economic upheaval. Assassinations. A war with the Goths.

History is sketchy on Valentine’s life, as church records were destroyed by Roman authorities.

Valentine was a priest in Rome (or a bishop nearby).

He refused to worship Roman gods or idols, and conducted marriages, including for Roman soldiers, in direct defiance of the emperor. Valentine was eventually arrested, convicted and condemned to die.
While in prison, his jailer asked Valentine to pray for his blind daughter…and when Valentine did…she was miraculously healed. The miracle converted not only this Roman jailer to Christianity, but many others too. A strong bond developed between the jailer, his family and Valentine. Consequently, on the eve of his execution, Valentine penned a loving note to this formerly-blind jailer’s daughter to encourage her new faith. He signed it “from your Valentine.” 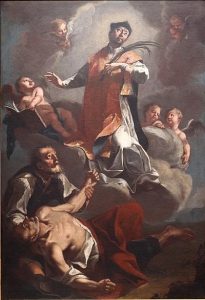 The next day Valentine was viciously clubbed and stoned, then beheaded outside Rome’s Flaminian Gate…on February 14, 269.

Over 230 years later, Pope Gelasius designated his death day as “Saint Valentine’s Day.” And because of Valentine’s ministry of love–and radical commitment to traditional marriage in a culture that despised it–the holiday found it’s root. The tradition of sending “Valentine” cards to loved ones and particularly lovers emerged with this special day.
And now you know how we got Valentine’s Day. It’s a Christian holy day to honor the life of a Christian saint who gave his life for love and traditional marriage.
I dare say we need more Valentines in our day and age, too.
Tweet
Share
Share
Posted in Church and Religion, Holidays, Christianity and Religion, World History, World History and tagged Holidays, Roman Catholic Church, Early Christianity, world history, culture