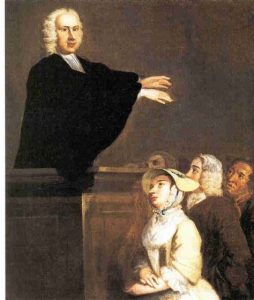 America’s first colleges were in the Ivy League. And they were created for a distinct purpose.

The original 1636 purpose of a Harvard education was to “…advance learning and perpetuate it to posterity: dreading to leave an illiterate ministry to the churches, when our present ministers shall lie in the dust.”

Essentially, Harvard trained the clergy and equipped missionaries to work among the Indian.

When Harvard started to drift from that original objective, a new school called “Collegiate College” was founded in New Haven, CT (1701). Thanks to funding by a Boston merchant named Elihu Yale, the New Haven school was eventually renamed Yale University.

One of Yale’s earliest students was a 13-year old kid named Jonathan Edwards. Four years later this teenager graduated valedictorian of his class and started his career as a member of the Presbyterian clergy.

In 1741 Jonathan Edwards preached a “fire and brimstone” message that ignited the Great Awakening revival in America.

It’s a religious revival–at the time mostly among America’s youth–that would have significant consequence upon America’s moral and political fabric. In fact, the Great Awakening spiritually united the colonies in their revolt from England. That was no small feat, as each colony was religiously distinct and often fought with other colonies over doctrinal matters and biblical interpretations. 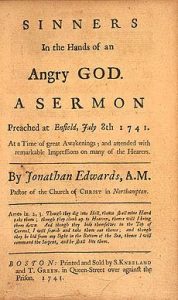 Edward’s sermon was titled “Sinners in the Hands of an Angry God (preached and published on July 8, 1741).” Here is a synopsis:

The Wrath of God burns against them, their Damnation don’t slumber, the Pit is prepared, the Fire is made ready, the Furnace is now hot, ready to receive them, the Flames do now rage and glow. The glittering Sword is whet, and held over them, and the Pit hat opened her Mouth under them…

However unconvinced you [the unconverted] may now be of the Truth of what you hear, by & by you will be fully convinced of it…The God that holds you over the Pit of Hell, much as one holds a Spider, or some loathsome Insect, over the Fire, abhors you, and is dreadfully provoked; his Wrath towards you burns like Fire; he looks upon you as worthy of nothing else, but to be cast into the Fire…O Sinner! Consider the fearful danger you are in…

Therefore let every one that is out of Christ, now awake and fly from the Wrath to come. The Wrath of almighty GOD is now undoubtedly hanging over great Part of this Congregation: Let everyone fly out of Sodom: Haste and escape for your Lives, look not behind you, escape to the Mountains, least you be consumed.

The purpose of Edward’s message was to teach on the reality of Hell, but his words left congregants in tears, fear and repentance. During the sermon, Edwards was interrupted several times due to wailing, moaning and shouts of “what must we do to be saved?”

The response to Jonathan Edward’s message, especially after it was published for others to read, spread like wildfire.

A revival, now known as the First Great Awakening, changed America between 1740 and 1770.

Ben Franklin observed that this Great Awakening “was wonderful to see.” It moved Americans, he wrote, from “being thoughtless or indifferent…it seemed as if all the world were growing religious, so that one could not walk thro’ the town in an evening without hearing psalms sung in…every street.” It wasn’t without its critics though. Conservative Congregationalist clergy, particularly the Puritans, bitterly denounced the “bodily effects” of congregants fainting, convulsing and crying loudly.

But Edwards didn’t let the opposition faze him. He also didn’t just preach about Hell and repentance, even though that’s what he’s remembered for. He denounced the African slave trade (a radical idea at the time), and rallied to support the Indians by criticizing those who profited or stole their land. Edwards wrote several books, including one on The Life of David Brainerd (1749) that inspired missionaries for generations.

According to one biographer, Edwards “scarcely gestured or moved, and he made no attempt by the elegance of his style or the beauty of his pictures to gratify the taste and fascinate the imagination.” Instead, Edwards powerfully persuaded by “overwhelming weight of argument” and “intenseness of feeling.”

In his twilight years Edwards worked with the Indians. However, his preaching proved unpopular. For years no one converted or joined his congregation. Eventually he was fired. Edwards was then elected president of Princeton in 1758, but he didn’t live a year in that work (dying of a smallpox inoculation). He left behind his wife Sarah and eleven children.

Despite Edward’s troubles, his mark on America (and her founding fathers) was deep. The First Great Awakening revivals in America rooted our nation (and her leaders) to a biblical foundation for democracy, government, human rights and justice. These are all Judeo-Christian principles found in the Bible. Americans in the late 18th century were overwhelmingly Christian in their views.

And that religiosity was significant for a world in revolution.

The French Revolution was known for its infidelity, immorality, violence, theft, irreligion and obscenity, but the American Revolution emerged beneath a flag of valor, honor, sacrifice, perseverance, freedom and duty. These uniquely positive and productive values were rooted to America’s Christianity. It’s something that the French diplomat Alexis de Tocqueville noted was still dominant in 1831:

Upon my arrival in the United States the religious aspect of the country was the first thing that struck my attention; and the longer I stayed there, the more I perceived the great political consequences resulting from this new state of things, to which I was unaccustomed. In France I had almost always seen the spirit of religion and the spirit of freedom marching in opposite directions. But in America I found they were intimately united and that they reigned in common over the same country…

It’s possible to argue the American Revolution might never happened without an American revival first. And that first “Great Awakening” was sparked by the “hell and brimstone” preaching of a Presbyterian named Jonathan Edwards…who was trained at Yale and later served at Princeton.

At the heart of America’s greatness has always been its goodness.

A goodness that was centered by a nation’s Christianity.