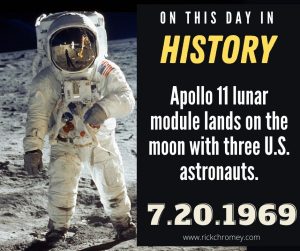 Today we celebrate the landing of Apollo 11 on the moon in 1969. It was a momentous and heroic feat, a testament to American strength, ingenuity and persistence. Neil Armstrong, Edwin “Buzz” Aldrin and Michael Collins are historic names and this moment an “American moment.”

But we should never forget Apollo 1.

Just two years earlier, on February 27, 1967, three Apollo astronauts were incinerated inside their capsule while it still sat on the pad. Gus Grissom, Ed White and Roger Chaffee were America’s first human casualties in the race to the moon. Their names are no less historic nor important.

Mission Control flight director Gene Kranz summarized the tragedy as being too “gung ho” and not truly being ready for launch. He then issued this directive to all his engineers at NASA’s Mission Control center:

“From this day forward, Flight Control will be known by two words: “Tough and Competent.” Tough means we are forever accountable for what we do or what we fail to do. We will never again compromise our responsibilities. Every time we walk into Mission Control we will know what we stand for.

Competent means we will never take anything for granted. We will never be found short in our knowledge and in our skills. Mission Control will be perfect.

When you leave this meeting today you will go to your office and the first thing you will do there is to write “Tough and Competent” on your blackboards. It will never be erased. Each day when you enter the room these words will remind you of the price paid by Grissom, White, and Chaffee. These words are the price of admission to the ranks of Mission Control.”

TOUGH AND COMPETENT. These were the values that landed a man on the moon on July 20, 1969. These were the principles that made, and still make, America great. George Washington. Abraham Lincoln. Frederick Douglass, Susan B. Anthony. The boys who stormed a Normandy beach. Ronald Reagan. The first responders who climbed the twin towers on September 11, 2001.

Those two words describe true Americans. It’s why no depression is too great, no war too lost and no moon too far. We the people will figure it out. It’s how we landed three Americans on the moon. It’s the heart of the U.S.A.

And the story of US.