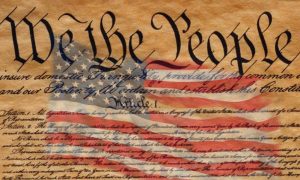 We the People of the United States, in Order to form a more perfect Union, establish Justice, insure domestic Tranquility, provide for the common defense, promote the general Welfare, and secure the Blessings of Liberty to ourselves and our Posterity, do ordain and establish this Constitution for the United States of America.

This preamble to the U.S. Constitution, drafted in September 1787 and ratified  on March 4, 1789, is the guiding document for the United States of America. The Constitution was the first attempt to “federalize” or “unionize” the states…and it’s been a source of national political conflict ever since.

But what if the “Constitution” (of 1791) was “unconstitutional” in itself?

Before the ink on the Declaration of Independence had dried (July 4, 1776), our Founding Fathers introduced the “Articles of Confederation and Perpetual Union” (July 12, 1776). It was our first Constitution and on March 1, 1781 was fully ratified. 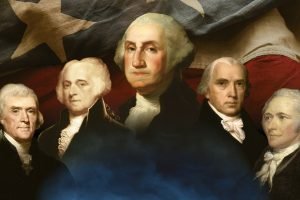 Originally, our Founders envisioned the United STATES of America, and the Articles of Confederation reflected this grand idea. Under these Articles, the federal government had largely three abilities and that was to declare war, raise armies and negotiate treaties. The individual states retained all power to “constitute” (govern) their people as they desired, including taxes, education and commerce. These Articles were in effect throughout the Revolutionary War period (1777-1790).

It was the original desire of our Founders to craft a loosely-knitted confederation of states…each with a distinct flavor. This was particularly notable in religion. The fear of a national “church” was a reason why our Founders chose to “confederate” rather than “federalize” in 1776-1777. Every state had its “preferred” Christian religion. Maryland was Roman Catholic. Pennsylvania was Quaker. Virginia was Anglican. The vision of the Founding Fathers was to be a “Christian” nation without forcing any one particular sect of Christianity (with allowance to non-Christian religions–like Islam and Judaism–to live peaceably too).

The problem is some states governed differently than others and that produced unintended and terrible consequences. For example, in Massachusetts the Shay’s Rebellion (1786-1787) sparked concerns when thousands of angry farmers (who couldn’t get lines of credit) rioted and nearly brought the state down. Meanwhile, in Pennsylvania, their legislators passed a bill to abolish slavery (March 1, 1780) while other states like Virginia and Georgia used their sovereignty to strengthen their slavery laws. This is what eventually created the “free” and “slave” states of the American Civil War. 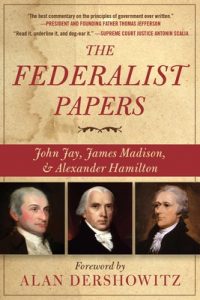 In the 1780s, a group of “federalist” Founding Fathers, who believed we needed to strengthen FEDERAL control and be the UNITED States of America, flexed their political power. Alexander Hamilton, John Jay and James Madison penned a work known as “The Federalist Papers (1787-1788)” to promote a more “federal” government. But that didn’t sit well with other Founding Fathers. Anti-Federalists like Patrick Henry, Samuel Adams and James Monroe vehemently disagreed. We are the United STATES of America, they argued, and pointed to the “perpetual” (non-changing) nature of that first Constitution. This disagreement would become a political wedge that remains to this very day.

The only way to change things was to revise the original Constitution.

And so they did. 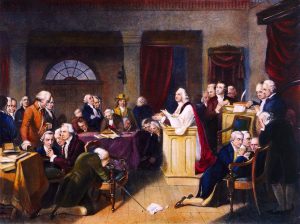 On May 25, 1787 a Constitutional Convention was held in Philadelphia, PA to sort the mess out. As you might expect, the debate was raucous and deeply divided. In fact, some delegates were so frustrated they headed for home. Consequently, a call to retreat, reflect, pray and read the Bible was suggested. And that’s what these delegates did. For hours the Founders prayed for our young nation. They read Scripture. They went to church. They started every session with a chaplain’s blessing and prayer (a tradition that continues to this day).

In the end a “peace” was found and an improved “democratic republic” was born. The Federalists won the argument and a new federal U.S. Constitution was drafted, then sent to the states to be ratified. This new Constitution gave the federal government more control but still recognized the sovereignty of individual states. But that didn’t stop the disagreement. Even though every state eventually ratified the new Constitution (a few begrudgingly), problems still remained. How much sovereignty does a state enjoy? For example, Southern states would later employ their “state’s right” to use slavery as part of their commercial and private interests. Texas and California simply solved the problem by constituting as “republics.”

And what about that one little word in the original 1776 Constitution: PERPETUAL? If the ORIGINAL Constitution is a PERPETUAL one, could it be changed at all?

Abraham Lincoln echoed this problem in his inaugural address (March 4, 1861): “The union is much older than the Constitution … the faith of all the then thirteen States expressly plighted and engaged that it should be perpetual, by the Articles of Confederation in 1778.” And yet, even Lincoln realized the only answer to slavery was a FEDERAL and UNION solution. There are some issues bigger than one particular state’s preference and sovereignty.

Federalism flexed its muscles with the abolition of slavery, but it’s been seen in other ways too. A federal government purchased new western frontiers, created national transportation systems (trains, interstate highways), set aside national parks, instituted a national income tax, oversaw alcohol regulation, social security, public education, and other American interests. A federal government would send our sons to war in Europe, Korea, Vietnam and Afghanistan.

But the STATES RIGHT (libertarian) idea has never fully died either. The ability for a state to sovereignly govern as its population desires is what sparked movements to abolish slavery, give women the right to vote, recognize gay marriage and legalize marijuana. It’s also what made some states “bluer” and others “redder.” It was states rights that led the Southern rebellion and secession to commence a Civil War. It drove how individual states handled Covid-19, gun control and, now with the overturn of Roe v. Wade, abortion. How much reach and influence does the Federal Government have on the individual state?

So the constitutional question has never gone away. It truly has been a “perpetual” sticky wicket.

Are we the UNITED (federalist) States of America?

Or are we the United STATES (confederation) of America?

It’s WHY “we the people” are always attempting to create a more “perfect union.”

Even though it’s truly an “inconvenient” process.