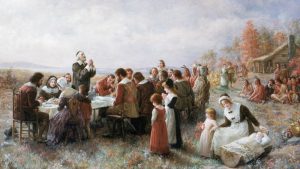 It’s a day we’ll gather for turkey, dressing, sweet potatoes, and pie. We’ll gather with friends and family, watch football and check the advertisements for Black Friday specials. Most of us will share gratitude for something or someone.

But in 1621, the first Thanksgiving feast happened for none of those reasons.

Here’s the REAL story. The story that you won’t hear on the History Channel, at the museum or in school. In fact, if you’re under 45, you’ve likely never learned what really happened with the pilgrims. You’ve been fed a history that one revisionist stated was how “noble-minded pioneers slaughtered Indians with little remorse, kept servants and slaves, and treated women no differently than cattle.”[i]

Many Americans believe Europeans originally settled America as part of a systematic “hostile takeover” of the native Indian (or indigenous people). The “white man” stole the land from the Indian, then enslaved the African Black.

But is that true? Were the Pilgrims evil white Christian oppressors? Or have we been taught the wrong story.

To understand this tale we need to begin in 1603 when King James I ascended the English throne. King James wanted a pure Anglican church and absolute obedience to civil authority. He drove dissident groups underground through imprisonment, fines and other persecution. In 1611, King James would even “authorize” his own Anglican translation of the Bible. Among these dissident groups were Puritan Separatists. Initially, they wanted to “purify” the corruption in the Anglican church but eventually found separating to be godlier. In 1607, an entire church (known as the Scrooby congregation) illegally migrated to Holland to escape King James.

Holland proved tolerant of religion, but also more heathen in culture and traditions. After a dozen years living among the Dutch, this Scrooby church noticed changes in their kids…and they weren’t good ones. It was time to move again. That’s when they heard about a new world called “America.”

In September of 1620 these Puritan “pilgrims” set sail for America. There are 102 on board, but only half were Puritans. The rest were individuals who wished to join these pilgrims and create a new colony. They had special vocational skills the Puritans needed. The two-month voyage across the Atlantic was a dangerous and life-threatening. Intense storms nearly tore the Mayflower ship apart. Originally the pilgrims planned to settle in Jamestown, VA but a winter storm pushed them further north into Cape Cod in modern day Massachusetts.

One of the pilgrims aboard the Mayflower was William Bradford. He was barely 30 years old but already a respected leader among the Puritans. He volunteered to help explore the area with several other men. But first they needed to agree to what would become “The Mayflower Compact.” The Puritans knew settling in a different area than Jamestown could be perceived as defiance by King James. Consequently, they wrote out a simple constitution—the first for Americans—promising “all Submission and Obedience” to “King and country.” They also stated their purpose was a CHRISTIAN settlement “undertaken for the Glory of God, and Advancement of the Christian Faith.”

With the Compact signed, exploration parties commenced. Initially, they found no people. The cold November winds were chilling, the New England land barren, rocky and hard to traverse. On their third exploration the men discovered an abandoned Indian village. It was the former fort of the Patuxet Indians and it was now a graveyard of skulls and bones. Between 1616 and 1619, a deadly plague killed off the entire tribe. The tragedy of a tribe would be fortunate for these pilgrims seeking a quick home. But the young Bradford now faced his own tragedy. Upon his return to the Mayflower he learned his young wife had accidentally fallen into the cold Atlantic waters and drowned. It was the first of many misfortunes he’d face.

The abandoned Indian fort proved a Divine blessing for the pilgrims who began disembarking the Mayflower. Winter was approaching fast, and they needed food and shelter. By Christmas Day 1620 the settlers were rebuilding the old Indian fort. Unfortunately, starvation, freezing temperatures and sickness soon took its toll. At one point, Bradford collapsed from a sudden pain in his hip. Some feared he wouldn’t last the night, but he “miraculously” pulled through. Not everyone was that lucky. During March and February, two to three pilgrims died every day. By spring more than half the original 100 pilgrims were dead.

Many Puritans would later thank a hired soldier named Myles Standish for their survival in that first winter. Standish not only nursed Bradford back to health, but many others too. He foraged for food, reinforced the fort and kept the dying pilgrim community alive. He’d also be William Bradford’s right hand man…and a gift from God. For Bradford everything was a matter of Divine Providence. God was controlling this venture…and blessing it. Even when the Mayflower headed back to England and the ship’s captain begged the starving pilgrims to return, they refused. God had led them to America.

As for the neighboring Indians? Here’s the real story that’s not taught today.

On March 16, this surviving band of Puritan pilgrims had their first meeting with a native American. His name was Samoset and he was part of the Pokanokets tribe. His chief Massasoit had sent him to meet the white settlers and to their surprise he greeted them IN ENGLISH. The introduction grew into a friendship and eventually a mutual treaty to work together for the good of all. The Puritans and Pokanokets agreed to help each other and, if necessary, fight together. It was an alliance that likely saved the pilgrims.

The reason Somoset could greet the pilgrims in their English tongue is due to another Indian named Tisquantum. He was not a Pokanokets Indian. In fact, he belonged to that fateful Patuxet Indian tribe that had perished due to the plague. Tisquantum was kidnapped and taken to Spain to be a slave prior to the epidemic. Then he was sold to some Spanish Christian monks. These monks educated Tisquantum, taught him Spanish and English, as well as European customs. They also instructed him in Christianity and told him about Jesus…then they freed Tisquantum. The freed Indian left Spain and traveled to England (meeting Pocahontas) and then, in 1619, returned to his native America.

But Tisquantum returned to the same skulls and bones that the pilgrims would eventually discover. His entire village was gone. His family and friends were dead. His entire life and culture was finished. So he joined the Pokanokets tribe. He was the one who likely taught Samoset a simple English greeting. Because once in the door, Tisquantum quickly took the lead. He did all the translation work between the Indians and these white settlers. He even helped create the treaty. He lived with the pilgrims for nearly two years and proved an indispensable resource to Bradford and the colonists. Bradford said Tisquantum was “a special instrument sent of God for their good beyond their expectation.”

The Puritans gave Tisquantum a different, shortened name. To them, he was known simply as “Squanto”—one of the most influential Indians in American history. Like Pocahontas and, later, Sacajawea, he was a trusted friend to the white settler.

Squanto singlehandedly equipped this struggling colony. He was their American “Moses”—leader, guide, interpreter, and advisor. He introduced the settlers to the fur trade and taught them how to hunt and fish. He showed them how to grow crops in the rocky Massachusetts’s dirt, including a new crop known as “corn.” At one point, a food shortage forced Bradford to take a treacherous expedition to trade some pelts. Squanto expertly piloted the ship through dangerous waters. But that expedition was also Squanto’s swan song, as he contracted “Indian fever” sometime during the trip. Within days, he was dead. Bradford tenderly cared for his Indian friend to his last breath. He wrote in his journal how Squanto was a “great loss” to him and the pilgrim colonists.

The year of 1621 proved a banner year for the pilgrims.

Despite the steep loss of human life in early spring, the colony had rebounded—thanks to the help of Squanto and the Pokanokets tribe. They now thrived in their new world. There was an abundance of wildlife and fish, not to mention trees for building homes. The pilgrims killed so much fowl and deer, and their crops grew so well in 1621, that they had more than they needed for the coming winter. It was time to party.

AND THAT’S WHAT THE FIRST THANKSGIVING WAS ALL ABOUT. Yes, there was gratitude towards the Indians. It why the pilgrims invited their chief Massasoit and several Indians to join their company of ninety for a good old-fashioned potluck dinner. They feasted for three days on wild turkey, venison, fish, fowl, fruits, nuts and vegetables. They also dined on a new dish known simply as “corn.” A pilgrim named Edward Winslow recorded his gratitude: And although it be not always so plentiful, as it was at this time, with us, yet by the goodness of God, we are so far from want, that we often wish you partakers of our plenty.”

Thanksgiving was about THANKING GOD for his “goodness” and his abundant provision. It was also gratitude for new friends, rugged individualism and freedom to live (and worship) as one desired.

It’s why those who wish to twist this Thanksgiving tale into a story of greed, theft and hate completely miss the point. The Puritans weren’t oppressors. They didn’t steal any land. In fact, every Indian tribe in the area could’ve done what these Puritans did but they did not. Why? Because their superstitions about death kept them far away from that plot of land. They feared inhabiting such a place would bring death upon their own tribe. So the abandoned fort was never inhabited again…until a hundred hungry European Christians desperately needed shelter one cold November day.

Thanksgiving is a wonderful holiday with an amazing tale of survival. We should enjoy the bounty of what we’ve earned and produced. But don’t forget to be grateful for how God provided that opportunity, that job, that paycheck, that home, that food. And out of charity and gratitude, don’t forget to invite some friends to the table.

Thanksgiving is about being grateful, hopeful…and neighborly.