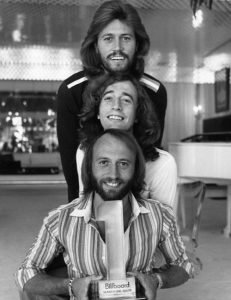 Irving Stone studied great men his entire life…their habits, attitudes and qualities. He finally concluded their primary characteristic was RESILIENCE. “You cannot destroy these people” he said,  “Every time they’re knocked down, they stand up.”
And sometimes they even dance. Need an example? Consider the Bee Gees.
This trio of brothers formed in England as a skiffle-rock band and eventually found international success with their cool pop and soft ballads in the 1960s. But they were never huge in America and that was what every English artist considered “making it.” By 1969, the Bee Gees had lost so much musical steam the band broke up.
A year later the “Brothers Gibb” (BGs) got back together to try again, enjoyed a few hits (including a #1 US single) but, again, by 1975 were pretty much washed up. Their slow slide, from stadium tours to club dates. created disappointment and desperation. That’s when they decided to radically reinvent their sound.
And the Bee Gees chose DISCO to do it. And that was a bold move…a CRAZY, even foolish, move.
In the mid-70s, disco was as dying genre. It was never big, save in the bigger urban city dance clubs. The black community had moved on to funk while white artists like KC and the Sunshine Band kept disco on life support. Nevertheless the Bee Gees took a flyer, helped by another crazy idea to use falsetto voices.
In 1975 they released “Jive Talkin'” and it shot to number one. A year later “You Should Be Dancing” returned the Bee Gees to the top. That’s when they caught the ear of a movie producer working on a project that would become “Saturday Night Fever.”
Contributing multiple #1 songs to this movie’s soundtrack, the Bee Gees were suddenly an “overnight” success. The band was everywhere. With sold out stadium tours, movie projects and new-found success, everything the Bee Gees touched turned to gold. Between 1977 and 1979 they had six number one songs on U.S. charts, including four from “Saturday Night Fever” alone, more than any other group of that era.

Many music historians now credit the Bee Gees with single-handedly reviving disco in the late 1970s to make it the dominant musical genre we know today.

In the late 1970s, disco ruled the U.S. music charts. Artists like ABBA, Donna Summer, Village People and Earth, Wind and Fire all scored success in disco. Even rock bands like Queen, the Rolling Stones and KISS released disco songs, much to the chagrin of their core fan base.
Today, the disco sound can still be heard, featuring that signature Bee Gee falsetto and infectious dance beat. Meanwhile, the Bee Gees have sold over 120 million records, a class that includes only Michael Jackson, Garth Brooks, Elvis and the Beatles. In 1997 they were elected to the Rock and Roll Hall of Fame.
The chorus to their second hit “You Should Be Dancing” asks “What you doin’ on your bed (on your back)? It’s a good question. When our lives seem a mess, our careers on ice, our dreams dashed and our opportunities limited, it’s easy to fall into a funk (pardon the pun) and disappear, depress, even die.
But the Bee Gees offer a different option: YOU SHOULD BE DANCING! When life throws a curveball, do the two-step. When the heat is on, do a little tango. When things get hard, put on your boogie shoes.
Today is the FIRST day of the rest of your life. I hope you dance.
Tweet
Share
Share
Posted in Rock and Roll History, Pop Culture History, U.S. History (Late 20th Century), 1970s, Thought of the Day, Baby Boomer, Gen X and tagged entertainment, culture, Gamer Generation, Cable Television Generation, GenX